“Juana la loca,” or Queen Joanna of Castile (1479-1555) never reigned because her father, her husband, and her son consecutively declared her insane and unfit to govern, claiming her political role for themselves. According to Gioconda Belli’s rehabilitation dressed up as a quite marvellous novel, the poor woman wasn’t insane at all, just squeezed between three males who had much bigger political ambitions and instincts, and whom she had the misfortune to love. (The men in question were Ferdinand II of Aragon, her father, Philip the Handsome, her husband, and her son Charles I of Spain and V. of Germany, in whose empire the sun never set.)

Gioconda Belli (born 1948) brings Joanna back to life using Lucia, a young woman in 1960s Madrid (so she’s vaguely of the author’s generation, who also went to boarding school in Madrid in the 60s) who plays her role in a game of history re-enactment that allows her to go through at least some of the experiences (love, vulnerability, imprisonment, bereavement) that Joanna went through in the 16th century. The role play artifice bridging a gap of 450 years works surprisingly well, bringing both the unfortunate queen and her modern day interpreter to life. The male history prof who sets the situation up and manipulates Lucia as the three men in her life manipulated Joanna remains more enigmatic. The spooky old house where much of the story is set is almost a character of the story and reminded me of the modern classic Nada by Carmen Laforet.

Does the author convince us that Joanna wasn’t mad after all? In her afterword she argues that while historians tend to label her as schizophrenic, none of the psychiatrists she consulted agreed with this diagnosis. Most tellingly, Joanna only went “mad” when she was treated badly, e.g. locked up, forcefully separated from her children, etc., but appeared perfectly sane under normal conditions. Which suggests that she wasn’t psychotic at all.

What appears to have been her real problem, however, was a lack of political instinct, which turned out to be catastrophic for somebody thrown into the political arena simply by virtue of her royal descent and her robust health – everybody else with higher ranking claims to the throne died young. Yes she was kicked around by the men in her life, but one can’t help thinking that the queen gene skipped a generation. Her mother, Isabella of Castile, described as cold-hearted in the novel, but famous for the Reconquista (the expulsion of the Arabs from the Iberian peninsula) and for sponsoring Columbus’ crossing of the Atlantic, would have asserted herself in a similar situation, while Joanna just drowned in it and went “mad”. 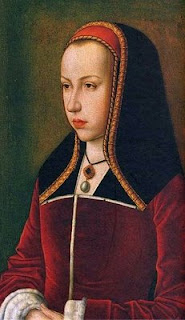 Picture from Wikimedia
Posted by Michael at 10:00 AM

Great review, thanks for alerting me :-)