Back in 2003, the web was a very different place – there was no facebook, and I used to socialise on the Shakira forum where at that point people still went by pseudonyms and didn’t show their faces except after you’d won their trust. I got to know quite a few lovely people this way, mainly by exchanging written words, and it always intrigued me how we influenced each other’s lives just through writing. I always wanted to write a movie script about that experience, but I didn’t quite have the right address book to make this sort of thing work.

Over time, I had the pleasure of meeting a few of my forum friends in real life, among them Ana Esther from Spain who spent a few months in Ireland and came over on a night coach to stay with my family for a weekend: 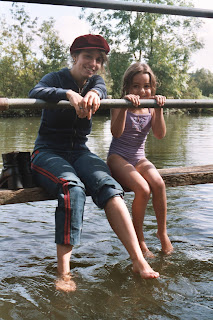 We met again for a concert in Madrid, but then lost touch, except for google+ which we both hardly use at all. Checking google+ this week, I found a link to one of her videos (she’s studied audiovisual communication) and through that discovered an earlier video where she examined the issue of anonymity in online chat. A boy who pretends to be a girl chats with a girl who pretends to be a boy. And when they meet up and discover their mutual deception, they look extremely cute and embarrassed.

Ana Esther wrote the script and plays the girl, check it out (Spanish only, I’m afraid), I love it to bits:

PS I'm basking in the warm glow of the illusion that I might have provided 0.0001% of the inspiration for this, even though I've never pretended to be a girl. Still, my nick, pensandoenti, may have come across as a bit girly, I suppose?

I wrote a feature about psychoactive drugs a few weeks ago, mainly inspired by the recent paper from David Nutt and colleagues who argued that the blanket ban of psychoactive drugs harms progress in neuroscience (apart from ruining the lives of millions of people with the unwinnable "war on drugs").

Since then, tragic events, including the death of a teenage girl here in Oxford, have highlighted the issue. There is a properly dangerous drug making the rounds in the UK right now, PMA (paramethoxyamphetamine) (probably called Dr Death for a reason), but as drugs are banned regardless of their harm, it's hard to know what is and what isn't dangerous. Plus, there is no quality control, and if kids buy an illegal pill, it could contain anything. In the Netherlands, by contrast, there are labs checking up on what is being traded, and they haven't had problems with PMA yet.

Essentially, my bottom line is, people always have used mind-altering drugs and always will do, and if there wasn't this blanket prohibition banning harmless and dangerous things alike, it would be much safer for them to do so. Hardline prohibitionists are just creating most of the problems they are pretending to solve.

Oh well. Don't get me started on this, it drives me up the wall in no time. Just read my feature:

which is freely accessible (and legal, still!) as PS: couple of further links re. the recent deaths linked to PMA:

PPS only after publishing this blog entry I became aware of the organisation Transform Drug Policy Reform, which has published detailed suggestions for a drugs regulation based on actual scientific evidence and on policies that are feasible (borrowing bits and pieces from established frameworks such as the handling of prescription drugs). "After the War on Drugs: Blueprint for Regulation" is freely available as a PDF download, but if you would like to support the organisation, you can also order it as a book from them. You can also download the executive summary only, which is also available in several other languages including Spanish, Russian, and Italian.

My latest feature in Current Biology covers the triangular relationship between humans, their pets, and undomesticated animals that may come in conflict with one or the other. I've specifically looked at two cases that made headlines recently, namely badgers vs. cattle, and cats vs. birds. As always, problems are complex, and emotional involvement that people tend to have with specific animal species can make it even harder to find rational solutions.

The feature is out in today's issue:

Where wildlife and tame life collide foam from the horse's mouth

In a late follow-up to the frog foam story from 2009, I covered the structure of an equine protein coming from the same groups. Latherin is found in the sweat and saliva of horses and has unusual surfactant properties suggesting a new mechanism.

Read all about it in Chemistry World (free access):

A foaming protein from the horse’s mouth

NB: this came out so quickly that I actually missed it when it appeared, hence the slight delay in horn-tooting. Some not so sweaty horses salivating over buttercups in a field near our house.