First up, I have to admit that this, Rushdie’s 10th novel, is the first one I’ve read, so I may end up saying things that are blatantly obvious to people more familiar with his work. I’m also quite happily ignorant of the work of most of his male, British-based contemporaries. So I’m in the fortunate position of reading the book purely on the merits of its contents.

What attracted me to the novel was the fact that it makes surprising connections between Orient and Occident, weaving history and magic realism into a very colourful pattern, which, I think, tells us something about our shared cultural heritage. The enchantress of the title is Qara Köz, (supposedly) an aunt of the Mughal emperor Akbar the great. While reading the book, I wasn’t sure whether she was among the historic or the fictional characters, but just now a google search for her name brought up only references to the novel, so I guess she’s an imaginary person (just like Akbar’s favourite wife is imaginary within the novel).

At the court of Akbar arrives a European traveller who claims to be her son, although he is obviously too young for this to be true. The stranger tells an elaborate story to back up his claim, leading Qara Köz from the Mughal empire to Persia, then to Florence, where she meets historical figures including Niccolo Machiavelli, Andrea Doria, and the Medici princes, then to the New World, where the story-teller is born, who completes her circumnavigation of the globe.

Orient and Occident in Rushdie’s historical fantasy are equally violent and Machiavellian places, where nobody can trust anybody else. Celebrated military leaders typically die from treason within their own ranks. Everybody has to watch their back constantly, and the “enchantress” has to switch her allegiance repeatedly and walk the very fine line between being enchanting and being persecuted as a witch.

It is fascinating to see a synopsis of the histories that are normally treated as though they had happened on different planets, even though there definitely were trade connections, and thus must have been people who moved between the different cultures flowering in distant parts of the world.

I generally think that Europeans tend to be in denial about the influence that oriental culture, promoted by the Arabs in Spain and by the Turks at the Eastern borders of Christian Europe, had on our cultural evolution. Too keen to define itself as the Christian Occident against the Islamic Orient, Europe failed to appreciate the good things the Islamic world had to offer, e.g. Islamic science in the Dark Ages, when there was not much European science happening at all.

Therefore, this tale of two cultures projects a very interesting light on renaissance history (familiar in the European part, and new to me in the Indian part). Of course one could also read it as a fable reflecting modern cultural conflicts. 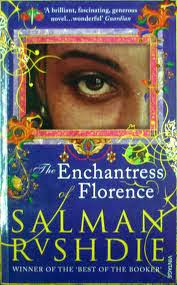