The movies of Alex de la Iglesia appear to be marketed as tosh around here, if they reach the UK market place at all, but if and when I get to see one, it turns out to be surprisingly good and indeed profound. Looking at the cover of the 800 balas DVD, I would never have dreamed of buying it, if it wasn’t for the fact that somebody I know appeared in it as an extra and was really excited about it when the film was made in 2002. Oh, and the DVD was only £2.99.

So, coming to the film without much hope other than perhaps spotting a familiar face in the crowd, I found to my surprise that it spoke to me in a number of different ways, and about rather profound issues, too.

The most important angle, and probably the issue the director had in mind when he dreamt the whole story up, is the layer cake of multiple deceptions that is lovingly built and destroyed here. There are many movies about movies (Truffaut’s La nuit americaine being my cultural signpost among them), and how the acting profession is essentially about lying and faking emotions. This one adds a few more layers to this theme. On top of the actors’ deception (and the illusion created by a rapid sequence of projected slides), we have the stuntmen pretending to be the actors. On top of that we have the out-of-work stuntmen (or maybe they never really worked as such?) endlessly repeating their wild West stunts in a run-down theme park, pretending they are part of the glorious tradition of the spaghetti western.

The entire hall of mirrors, deceptions and delusions falls apart when a young boy decides to meet his grandfather who runs this show and deludes himself about various aspects of his past and present life. As the boy figures out who is trustworthy and who isn’t (a prostitute and his grandmother are about the only sane and reliable people in the madness), the handful of tourists who come to the park are clearly unable to tell the real fights from the faked ones, and take photos of everything regardless.

Then, reading number two, seeing that it is set in Spain (though in the wrong part of the country), one could interpret the movie as a modern day version of Don Quixote. In both works the imaginary fights of men inspired by fictional fights eventually turn into real ones with real blood loss. Oops, I think I would have to re-read the Quixote in order to elaborate further, so I’ll leave you with this tantalising hint.

Finally, one could regard the movie as an allegory for any human enterprise that starts out gloriously and ends in mayhem and in-fighting. Without thinking too hard, the UK’s “new labour” government strikes me as an obvious parallel. Or, indeed, one could do some self analysis. Is my life really an echo of past glories dependent on an audience ready to be deceived? The ticketseller gives the boy a clue: “If there’s no audience, there will be no show,” he says.

So the moral is: don’t believe what it says on the box (I’d love to think that maybe somebody really clever picked up the theme of the movie and just wanted to add an extra layer of deception to it, but that appears highly unlikely). This is not a western, it’s not about the violence, and not even about the nudity. It is actually a wonderful movie that has important things to say – much like Alex de la Iglesia’s earlier work “La comunidad” (Common Wealth, 2000). I’ll have to watch it again, as with all the excitement about the film, I still haven’t spotted that face I was looking for. 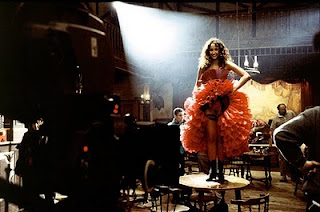