Lucky break charts episodes from the interlinked lives of a bunch of aspiring actors who meet at drama school and remain loosely in touch for over a decade after.

As she’s been to drama school herself and is married to an actor, Freud has no shortage of material, and the book is rich in absurd details of both the successes and the frustrations of struggling young thespians, ranging from penguins and pantomimes through to staged conversation with members of the royal family.

The large cast and the episodic nature of the narrative requires quite a bit of attention from the reader. Sometimes I felt like I had to keep track of somebody else’s facebook friends, but as the characters mature and their paths diverge, it becomes easier to remember who’s who. Also, it may help to read the book a bit more swiftly than I did.

It all sorts itself out by the end though, and I felt rewarded for staying the course. I’m almost tempted to start over again, now that I know who’s who. The other perk of reading this is that as a freelance writer I suddenly feel I have an amazingly sane and stable career compared to what these poor souls have to deal with. 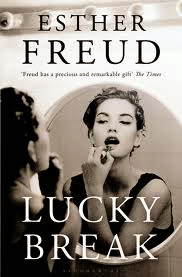