When I investigated the possible Huguenot origins of my Bondame ancestors in the Palatinate region, I looked at a map of Huguenot settlements in German-speaking areas, which also showed one in Markirch / Sainte-Marie-aux-Mines in Alsace. As one of my ancestors in the Palatinate came from that little town, I was intrigued and wondered whether some of his folks may have also been Huguenots or other refugees for religious reasons.

The guy who left Markirch to settle at Böchingen in the Palatinate was Paul Simon (1740-1813). The name Simon is completely useless for internet searches as it is a very common family name and also a widely used Christian name, and both these things across several European languages (never mind the famous namesake). Moreover, the male line only spent a few decades at Markirch. Before that, the Simons came from the Hunsrück area (where in a separate Simon lineage we have seen the name become a family name based on the Christian name of the founding father).

Thus, I really needed to look at Paul Simon’s mother and grandmothers. His mother was called Maria Susanna Trimbach (1713-1752). So I did a search on “Trimbach Markirch” and on the first page of ten results there were three separate items of interest. First I learned that there is a Trimbach winery in that area to this day. This is the third name in that small part of my family tree that is being printed on wine labels as we speak, along with Klundt and Minges, but I’ll rave about this another day. Second, a gravestone still exists of a Jacob Trimbach who died in September 1649. I still need to work out how he relates to my Trimbachs.

And third, there was a whole research paper on migration of miners across Europe, with Fischbach and Markirch being the focal points, and migration routes leading onwards to France. Paul’s father Johann Christoph Simon was among the miners who migrated from Fischbach to Markirch, and as his marriage to Maria Susanna Trimbach is mentioned in the text, this document turned up in my search. I would never have been able to find it based on his name.

So that migration of the miners, broadly westbound, is in addition to the eastbound flight of the Huguenots who also settled at Markirch, as the map suggested. The town, which allegedly was the third-largest in upper Alsace (today’s department Haut-Rhin) until the 19th century, must have been an interesting place to be at the time. Here’s the potted history of the town, adapted from the French Wikipedia article:

From the 14th century through to the French revolution, the town was split in two parts, with the small river Lièpvre representing the frontier between separate territories, and after the reformation, between confessions. The right bank of the river was part of Alsace, German speaking, and under the rule of the lords of Rappolstein (Ribeaupierre). On the left bank it was ruled by the dukes of Lorraine, French speaking, and would remain catholic after the reformation.

The mining which gave the town its post-reunification name of Sainte-Marie-aux-Mines has been an important activity since the 10th century, but it was the rise of silver mining in the 16th century that brought affluence to the town, with its peak activity from around 1545 to 1580. However, mining ceased during the 30-years war (1618-1648) and was only revived in 1710-1711.

At that time, the counts of Rappolstein, who owned the German side of the town, had close links to the Hunsrück area through marriages with the house of the Wild and Rheingrafen who ruled there. As a result, there were close political connections between the areas from 1673 to 1776, which may explain the very lively migration of miners from the Hunsrück to Markirch, including my ancestor Johann Christoph Simon (1707-1756) and his brother Johann Jakob Simon (1703-1761).

This was part of a larger pattern of westwards migration of skilled workers often originating in the eastern German regions like Harz and Erzgebirge, and leading as far west as southwest France. The historians Hans-Eugen Bühler und H. Peter Brandt have analysed this phenomenon in a detailed study published in 2003: “Muster europäischer Migration im Bergbau des frühen 18. Jahrhunderts: Fischbach/Nahe und Markirch/Elsaß als Drehscheiben des Austauschs” which also features the Simon family, who must have arrived at Markirch before 1732 (the date of Johann Christoph’s first marriage there).

Those typically Lutheran miners arriving from Fischbach will have found an interesting multicultural scene at Markirch where there were five different religious affiliations to choose from, including Anabaptist, Lutheran, German Reformed (Calvinist), French Reformed (Huguenot), and Catholic (NB that’s only on the German side of town, there was a separate Catholic parish on the French side). I understand the Amish also have their roots at Markirch, resulting from a schism in the local Anabaptist community that occurred in 1693.

The origins of this diversity go back to 1566, when the count of Rappolstein, Eguenolf III, introduced the Lutheran creed (although he was officially subject of the catholic Habsburg empire). Soon after, the 1572 St. Bartholomew’s Day massacre in France brought a wave of Huguenot refugees, joined by Calvinists expelled from Lorraine by the duke Charles III in 1585, and the complete parish of Badonviller in Alsace, fleeing the count of Salm in 1625. It was a lively little refugee camp there, where worshippers were mainly divided by language. German services were held at a little chapel “in the fields” (Mattenkirch) and attended by refugees and miners alike, while the French-speaking protestants used Saint-Pierre-sur-l'Hâte.

The field chapel succumbed to arson in 1757 but was rebuilt three years later and served until 1867. It was there that a tombstone was discovered with the name of Jacob Trimbach, who died on September 3rd 1649.

In 1768, Paul married Anna Christine Jungbluth in Böchingen in the Palatinate and settled there. By that time, there wasn’t much opportunity left in mining at Markirch. The new game in town was textiles, which were to become the dominant industry in the 19th century.

Bühler and Brandt note in their paper the surprising mobility of skilled miners in the 18th century. Not only did they migrate half-way across Europe to find opportunities in new or reviving mining regions. They often stayed mobile over several generations, with Fischbach and Markirch serving as relais stations for onward migrations that led second and third generations of mobile families as far afield as western France.

In the case of my ancestors, however, onward migration led Paul out of the whole mining business and into a wine growing area (not sure what he did for a living, but almost everybody in Böchingen has some connection to wine making!) – maybe this has something to do with the fact that his mother was a Trimbach? That’s the Alsatian wine connection which I need to unravel some other time. (Oh, and there still is the possibility that some of Paul's non-Simon ancestors in Markirch actually were Huguenots. Stay tuned.) 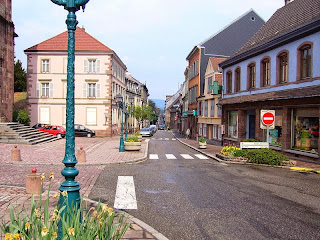