In a small Mesoamerican country called Faguas, a volcanic eruption has enriched the air with an antidote to testosterone, turning its macho men into kind and docile human beings who don’t put up too much resistance when the feminist Partido de la Izquierda Erótica (PIE) sweeps to an election victory and its charismatic leader, famous for having exposed prominent sex traffickers in her TV show, becomes president with an all-female government promising to “clean up” the country.

In a time when much of the more imaginative writing goes in the dystopian direction and the state of the real world may also be headed that way, it is unusual and refreshing to find an unashamedly positive utopian novel. Especially for me with a political background that has quite a few connections to the author’s, the general idealism feels like home and the protagonists the PIE committee are very sympathetic characters.

I’m not entirely sure if the novel would work for anybody who doesn’t experience this huge political feel-good factor. The postmodern structure which mixes different kinds of testimonies and documents is at first a bit confusing until you’ve worked out who’s who. Until about the middle of the book it appeared gratuitously random to me and I would have appreciated a frame, maybe set in the distant future, such as the work of a future historian who explores these developments. Belli has used distant times to great effect in The scroll of seduction as well as in The inhabited woman, and it might have improved this effort as well.

As it stands, this is an interesting book and a heart-warming story for those who still have a heat-conducting heart, but maybe not quite as spectacularly brilliant as the two earlier novels mentioned above. Depressingly, there doesn’t seem to be an English translation at all, although it has been translated into German (Die Republik der Frauen), Dutch (Het land van de vrouwen) and Portuguese (O País Das Mulheres) among other languages. 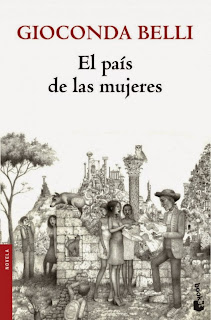