how to hammer a dulcimer

We seem to have given birth to a new string instrument, and now I'm trying to rationalise what happened:

So the young musician in the family wanted a hammered dulcimer. Her mother found a build-your-own instruction online. Her grandad helped her build the box. And I helped with the bridges and all the metal that goes on top (20 hitch pins, 40 tuning pins, more than 30 metres of piano wire for 20 courses of strings). And miraculously, the international 3-generation project actually resulted in a real musical instrument, which is now playable: 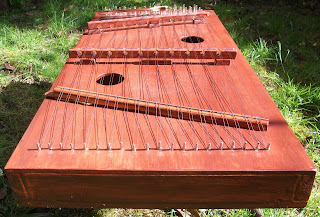 And here's what it sounds like shortly after completion of the work:

It's not very difficult to play (essentially it works like a xylophone with strings) and the construction isn't too challenging either. We disobeyed the instruction in adding more courses on the bass bridge, and by making the treble and bass bridges in one piece each with holes in it, rather than as many little ones.

With hindsight, I would suggest that the "simplification" of building the box rectangular rather than as a trapezoid as in commercially available dulcimers is causing as much trouble on the strings side as it avoids on the box building side, so I might one day try to do one with the proper shape. As for the cost, it's just under £ 4 per course of 2 strings for the metal work - plus the wood, paint glue etc. if you don't have that lying around anyway. In our household we probably have several dulcimers worth of broken furniture that could be recycled, so watch this space.