I have been playing Galician folk music for nearly two years now, and (as Pablo Casals famously said about his cello practice in his 90s) I'm beginning to notice some improvement. In the last few weeks I have been spoilt with opportunities to improve further. There was a Galician session at the Folk Weekend, then the the regular monthly one, and a week later, advertised only by word of mouth, a special one, with a special guest. Only two days before the event I found out that the special guest was the most special one you could imagine.

If you read up about Galician folk anywhere, eg in this recent feature in the Economist, the one musician whose name will definitely appear is Carlos Núñez. So, well, he was around visiting friends in the UK, and he came to our special session to listen to us playing and then to join in, playing his whistles (not the bagpipes he's famous for), dancing, chatting and generally being amazing. People in attendance were a mixture of the regulars from the established sessions in Oxford and Cardiff, as well as a delegation from the newly launched Galician session in London, which also set the event apart from our regular sessions.

So, I think everybody (including the paella cook and a stray Morris dancer) felt it was a magical night, and rather than raving on, I'll link to my videos here:

3) Mazurca dos Areeiras (David, who played the whistles at the far side of the room in this video, also recorded a clip of this in which I appear, see embedded video below)

4) an Argentinian chamame, I am told

(These videos are "unlisted" meaning they can only be accessed via these specific links and will not show up in searches.) 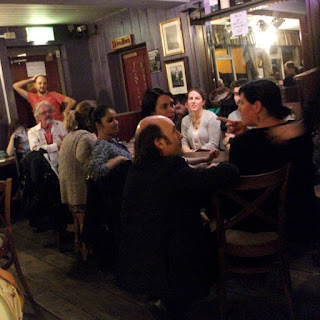 Carlos Núñez talking to our group of pandeireteiras (tambourine players). The guy in white at the back is a stray Morris dancer - his side had a dance-out just before our event and he stayed on, playing the spoons.


Mazurca dos Areeiras, the view from the other side of the room:

PS more magic to follow soon. O Arame, the second ever opera to be written and performed in the Galician language will be premiered in Oxford in June, conducted by Tamara Lorenzo Gabeiras. You can see her dancing in my video no. 1). I spent the entire session standing close to her without realising who she was, even though I had seen her in a recital a year before.