Of course people aren't racist, if you ask them. In the last decades, openly acknowledged prejudice has lost ground in western society, and only a small minority would admit to it. But are people still biased deep down, maybe without realising it?

Anthony Greenwald and Mahzarin Banaji have developed a very clever way of testing for such hidden bias, the implicit association test (IAT), which you can try out for yourself here. The test has now been widely used and many people report that they discovered implicit bias they were unaware of previously.

All this isn't quite new any more, but given that some remarkably prejudiced people are now in positions of power in some countries I could think of, and given the horrendous number of black people killed by police in the US, it is more important than it may have been in the more optimistic times when the test first went online. So I've read the book Blindspot by Greenwald and Banaji (shown below) and written up a feature about the remarkable story of the IAT and what it means for us today.

Oh, and I took two versions of the IAT, and I am pleased to report that:

1) Your data suggests:
Little or no association between Female and Male with Science and Liberal Arts.

So I am now moderately biased in favour of the IAT, as it gave me the results I hoped for. 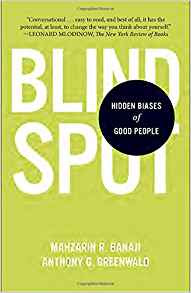