It doesn't happen that often that I get the chance to use a quote from Shakira in my writing, so I jumped at the opportunity to open my article about African genomics with a reference to last year's Fifa World Cup and its official tune, which includes the spoken words at the end: "We're all Africa."

Because, you see, considering the facts that we all came from Africa at one point, sooner or later, that most of human genetic diversity is found between African populations, not between "races", and that a large part of the global disease load weighs down on Africa, it really is quite weird that the new investigation of personal genomes so blatantly followed the money rather than the scientific interest in sequencing lots of males of European descent before even beginning to include some token people of different origin (or even gender).

Obviously, I have phrased this sentiment much more diplomatically in my feature and I also report on several initiatives which aim to empower Africans to take part in the genome revolution and also to reap the medical and economic benefits from it. 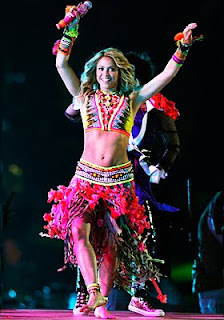 Shakira performing "Waka waka: This time for Africa" at the closing ceremony of the 2010 World Cup.
Posted by Michael at 11:16 AM