I have recently submitted both the book manuscripts that have kept me very busy since September, so I can now begin to reveal what they are about. The first one is a collection of nanoworld-related pieces from the last six years or so, written in German. It is organised similarly to my very first book, Expeditionen in den Nanokosmos(1995), which later appeared in English as Travels to the Nanoworld, although the field has grown and changed a lot since then.

Back in 1995, travels to the world of the invisibly small were the reserve of a very small number of well-equipped and adventurous pioneers. Now there are “nano” labelled institutes and companies everywhere, there are nanosized structures in every computer you can buy in the shops, and there are nanoparticles in most sun lotions.

The field has become so huge that I wouldn’t be able to give a representative account of it. Thus, the idea this time was to present my compilation of nano articles as a collection of “postcards from the nanoworld” without claiming much logic or completeness. These glimpses at the vastness of the small world would be flanked by an introduction and an outlook chapter as they were in my very first book.

This concept worked out very well for the content of the book, but didn’t quite make it onto the cover. The publishers preferred to pick specific ideas from the collection, so we’ve ended up with a gecko-themed book called "Von Geckos, Garn und Goldwasser: Die Nanoweltwelt lässt grüßen" which in a way fits in nicely with my previous platypus collection .

The book is due to come out in September this year and will look like this: 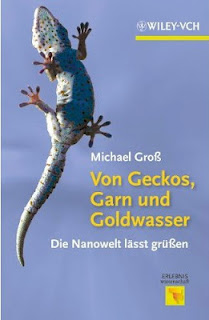 It is already listed at amazon.de. Further details and a dedicated gecko-website to follow soon.
Posted by Michael at 10:09 AM