Study: Dying stars breathe life into Earth
As dying stars take their final few breaths of life, they gently sprinkle their ashes into the cosmos through the magnificent planetary nebulae. These ashes, spread via stellar winds, are enriched with many different chemical elements, including carbon. Findings from a study published today in Nature Astronomy show that the final breaths of these dying stars, called white dwarfs, shed light on carbon's origin in the Milky Way.

First direct evidence of ocean mixing across the gulf stream

A tiny ancient relative of dinosaurs and pterosaurs discovered
I'd just call it a tinysaur. 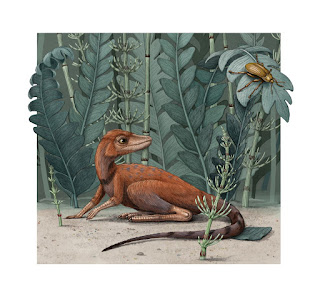 Illustration of Kongonaphon kely, a newly described reptile near the ancestry of dinosaurs and pterosaurs, in what would have been its natural environment in the Triassic (~237 million years ago).
Credit: Alex Boersma

To quench or not to quench: Understanding the role of a cyanobacterial photosystem protein

Researchers foresee linguistic issues during space travel
This is about subsequent interstellar travel groups shifting their languages in transit such that at the destination they won't understand each other. I don't think this is ever going to be a real problem - we'll have a babelfish (universal translation technology) long before we are able to travel to other stars.

The Guardian also has the story of the tinysaur