The music instinct: how music works and why we can’t do without it
Philip Ball
Bodley Head 2010 / Vintage Paperback 2011


To me the most important message from Ball’s book is the realisation just what an incredibly complex process it is to listen to music and to recognise it as something that you connect with, as opposed to a collection of random sounds. As 96 % of the general population (all who don’t have a physiological impairment stopping them) have this amazing ability, the assumption that only a minority can learn to make music, though widely held in Western society, is completely untenable, as Ball notes in his preface. Most of us have the music instinct, and many of those who have it don’t really use it to make music, claiming as an excuse that they aren’t musical or even tone-deaf (as some 17% claimed in a survey cited – the real number is 4%) . Even though they happily sing along with the radio.

For more details of how our music instinct works and just how amazing it is that even young children with no music education can build expectations of what might come next (expectations being a very important part of why we enjoy music), there are 400 more pages with comprehensive details from neuroscience through to ethnomusicology. Those who make music and wonder how it works should read it. I should have read it earlier. For those who don’t make music or deal with it much, the details and examples may be a bit much, I imagine. Maybe they should, after the preface, go away and start making some noise, and come back to the book later? Just an idea.

But as a warning, anybody who tells me they’re not musical will have this book thrown at them forcefully. 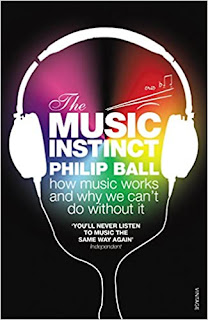 This paperback cover is more colourful than but otherwise using the same design as the hardback which I picked up from an Oxfam shop some time last year.