browsing through the cello tag on tumblr, I was surprised to discover a cellist and composer who shares my last name (although unlikely to be related, as it's a name that originated in many places independently): Johann Benjamin Groß (1809-1848). His Wikipedia entry only exists in German, French and Russian so far, so I'll compile the basic info in English here(may expand on this later):

12.9.1809 Born in Elbing (West Prussia, today Elblag, Poland, a coastal city with some 120,000 inhabitants). Parents: Georg Groß, bell-ringer (was that a full-time job?) and Dorothea van Bergen (watch this space - there are genealogy records for families with both these names in nearby places so I might be able to find his grandparents etc.)

studies cello at Berlin with Ferdinand Hansmann, a pupil of Jean-Pierre Duport (that's the older Duport, not the one of Napoleon/Stradivarius fame).

1824 Cellist at the theatre of Königstadt near Berlin

1833 short stint at the orchestra of the Magdeburg theatre

1834 played in a quartet at Dorpat (today Tartu, Estonia)

There he composed more than 40 works, including several concertos and many chamber works for the cello.

2004 After a period of oblivion, his work is performed again at the Schumann Festival at Düsseldorf. First recordings are released from 2009 onwards. 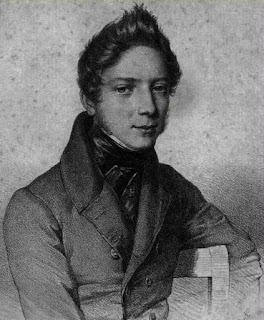