Past rapid warming levels in the Arctic associated with widespread climate changes
Using Greenland ice cores, new research is the first to confirm the longstanding assumption that climate changes between the tropics and the Arctic were synchronised during the last glacial period.

Anthropogenic CO2 increase is unprecedented
Even in earlier warm periods there were pulse-like releases of CO2 to the atmosphere. Today's anthropogenic CO2 rise, however, is more than six times larger and almost ten times faster than previous jumps in the CO2 concentration.

Discovery lays blame on supernova for extinction event nearly 360 million years ago
Between a decline in biodiversity and a series of extinction events, the Late Devonian period was not the most hospitable time on Earth. And then came one or more supernovae explosions whose resulting ionizing radiation was the final push that spelled the end for armored fish, most trilobites and other life.

Ichthyosaur's last meal is evidence of triassic megapredation
Some 240 million years ago, a dolphin-like ichthyosaur ripped to pieces and swallowed another marine reptile only a little smaller than itself. Then it almost immediately died and was fossilized, preserving the first evidence of megapredation, or a large animal preying on another large animal.

Dinosaurs' unique bone structure key to carrying weight
A unique collaboration between paleontologists, mechanical engineers and biomedical engineers revealed that the trabecular bone structure of hadrosaurs and several other dinosaurs is uniquely capable of supporting large weights, and different than that of mammals and birds.

Contact tracing apps unlikely to contain COVID-19 spread
Contract tracing apps used to reduce the spread of COVID-19 are unlikely to be effective without proper uptake and support from concurrent control measures, finds a new study by UCL researchers. The systematic review*, published in Lancet Digital Health, shows that large-scale manual contact tracing alongside other public health control measures - such as physical distancing and closure of indoor spaces such as pubs - is likely to be required in conjunction with automated approaches.

Researchers show children are silent spreaders of virus that causes COVID-19
Is anybody counting how many studies say this and how many the opposite?

Archaeology: X-ray imaging provides unique snapshot of ancient animal mummification
Analysis of three mummified animals - a cat, a bird and a snake - from Ancient Egypt using advanced 3D X-ray imaging is described in a paper published in Scientific Reports. The technique provides insights into the conditions in which the animals were kept, their complex mummification process and their possible causes of death, without causing damage to the specimens.

Australia's wish list of exotic pets
Unsustainable trade of species is the major pathway for the introduction of invasive alien species at distant localities at higher frequencies. It is also a major driver of over-exploitation of wild populations. In a new study, published in the open-access journal Neobiota, scientists estimate the desire of Australians to own non-native and/or illegal pets and the major trends in this practice. In addition, the team suggests ways to improve biosecurity awareness in the country. 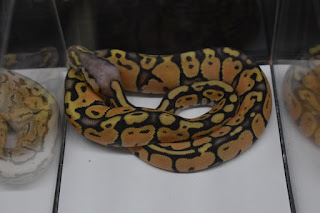