For the last 20 years or so, the biography on my website included a statement along the lines that I write about "everything except dinosaurs" - so I now will have to change that, because my latest feature is actually about dinosaurs, and about the crazy commercialisation of their fossils.

In a sense this is related to the reason why I didn't cover dinosaurs - because they are getting too much attention already. The general public's obsession with dinosaurs has surely contributed to the phenomenon that people with more money than sense have started the craze of buying major fossils to set them up at their homes and impress their visitors with them. So mostly, the feature is about humans going crazy about dinosaurs: 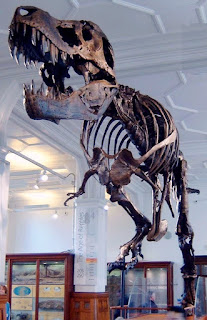 A cast of Stan the T rex, who plays a big role in this feature. Image: Wikipedia.