Lurking in genomic shadows: How giant viruses fuel the evolution of algae


Prehistoric shark hid its largest teeth
Some, if not all, early sharks that lived 300 to 400 million years ago not only dropped their lower jaws downward but rotated them outwards when opening their mouths. This enabled them to make the best of their largest, sharpest and inward-facing teeth when catching prey, paleontologists at the Universities of Zurich and Chicago have now shown using CT scanning and 3D printing. 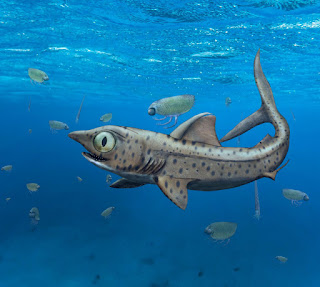 With mouths closed, the older, smaller teeth of the ancestors of today's sharks stood upright on the jaw, while the younger and larger teeth pointed towards the tongue and were thus invisible when the mouth was closed.
Illustration: Christian Klug, UZH

Gold nanoparticles turn the spotlight on drug candidates in cells
A team including researchers from Osaka University has developed a surface-enhanced Raman scattering (SERS) microscopy technique for tracking small molecules in live cells. The technique uses gold nanoparticles to boost the signal from alkyne group tags attached to the molecules. The alkyne group has a minimal effect on the drug molecule behavior and provides a signal that can be easily distinguished from the cell background. Their technique is expected to be useful in drug discovery.

Should robots have faces? asks the Guardian. Well, if you ask me, err, no?


Also for some lovely theremin music and explanations in German, check this radio programme celebrating the 100th anniversary of the theremin. With Lydia Kavina and Carolina Eyck.