a Belgian in the family

As I’ve mentioned before, my ancestors, who appeared to be German through and through in the 19th and 18th century, suddenly turned out to be a load of immigrants when we reached the 17th century. So far, we have found one move from Hungary, one from Italy, several from France and seven from Switzerland. I've now discovered the 16th immigration event in my family tree, which is the first one from today’s Belgium.

Linard Jacque, who later called himself Leonhard Jacob in Germany, arrived in Fachbach on the river Lahn in the 1670s. (This is very close to where the Lahn meets the river Rhine, and just a little bit upstream of Koblenz, where the Mosel joins the Rhine from the other side.) New ironworks were built there from 1671 onwards by the Mariotte family from Liege, Wallonia. That area was leading the world in metal processing technology at the time and had developed blast furnaces long before the industrial revolution came along with its steam engines. Expanding into other European countries, the Walloons brought skilled workers to the site, maybe from places in Wallonia where they had other ironworks. This also happened in Fachbach, where there is a marked influx of people with French names including also Jacquemot, Grisar, Permantier (from France, though), and others. 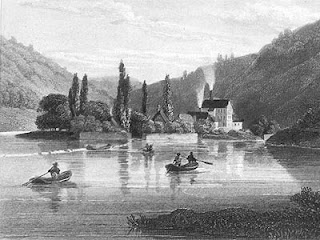 Historic painting of the Nieverner Hütte, from Wikipedia.

One family that seems to have been closely linked with my ancestors, judging by the mutual services as godparents and marriage witnesses, is the Grisar (Grisard, Grysar, Krisar) lineage, coming from Yvoir near Namur, and in previous generations from Sauheid near Liege. One might speculate that the Jacque family came from the same place and the families knew each other before they arrived in Germany, but I also found a source saying that recruiters working for the Mariotte family came to the town of Theux near Liege, so they may have just scoured the region for skilled workers in which case it would be quite hopeless to try and find the departure region of my Belgian ancestor.

Under the name of Jacob, his descendents did reasonably well in Fachbach, to the extent that in the mid 18th century there are two males called Johann Jacob who are the same generation but I’m not sure which belongs to my branch of the family (Leonhard Jacob junior) and which to Leonhard’s brother Wericus Jacob.

In any case, my lineage only stayed there for four generations, as Leonhard junior’s grandson, Philipp de la Strada, moved to Krefeld to work in the textile industry there and left lots of descendants.

genealogy of the Grisar family by Gerhard Hufnagel