the dream of the celt

This fictionalised biography of Roger Casement should be one story, as it is the story of one man’s life, but strangely it feels like two stories glued together that don’t really fit. First there is the story of the man who successfully exposed the cruelty of colonialism in the Congo and in Peru in the late 19th and early 20th century. Especially in the latter episode, where the sheer greed of the (London-based) rubber company fuels a culture of violence and torture against the indigenous workers who harvest the caoutchouc, the theme of corporate responsibility chimes very nicely with today’s concerns, and Casement emerges as an undisputed hero. As a dramatic historical development with interesting characters, exotic locations and clear relevance for today’s world, this would have made a very nice book on its own, either as a factual or as a fictionalised work.

The other story is Casement’s role in the much messier business of Ireland’s struggle for independence, culminating in the Easter uprising of 1916. Here he joins the more radical camp of those who don’t believe in the promise of autonomy and go for full independence, even if it takes armed conflict to achieve it. Even more controversially, at the beginning of World War I, he tries to forge an alliance with Germany. In the end, however, he wavers and wants to call off the uprising, while a shipload of weapons from Germany is already on its way and cannot be contacted. Under circumstances that are still debated, the arms delivery finds no recipients at the arranged rendez-vous, Casement gets arrested, and the uprising fails. He is sentenced to death, and his appeal is quashed amid the revelation of homosexual adventures detailed in his “black diaries.”

Vargas Llosa tells the whole life story in long flashbacks remembered by Casement in his final days in Pentonville prison. On the highly controversial issue of the diaries, he assumes that they are genuinely Casement’s writing, but that some of the events recorded are imaginative extrapolations of more innocuous beginnings, rather than precise records of a steamy (and at that time illegal) love life.

I mainly read the book because of the Irish part of the story (as a cousin of my great-grandfather was second officer on the Aud (Libau), which successfully broke the sea blockade but failed to find a recipient for those weapons), but found that part of the book less engaging than the Congo and Peru story. I wasn’t getting much of a sense of place of Ireland, or a sense of why Casement became so obsessively nationalistic. I understand why Vargas Llosas, coming from Peru, wants to tie in the Irish story along with the history that is closer to home for him, but maybe – memo for anyone who wants to make a film out of this – I might have focused on the colonial locations a bit more, covering only as much of the Irish tragedy as is necessary to explain his fall from grace and ultimate execution. 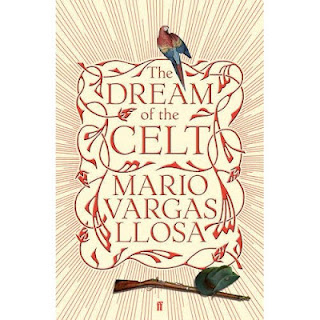 PS The original (El sueño del Celta) came out in November 2010, I can't think why it took the UK publishers more than 18 months to bring out a translation???