an ancient copper mine

After writing about the Simon family who were miners in Fischbach (Nahe) and then 170 km further south in Markirch (Sainte-Marie-aux-Mines, Alsace), I had the opportunity to revisit the ancient copper mine at Fischbach, which is where Johann Christoph Simon must have worked before migrating to Markirch, and where some of his brothers as well as his father Nickel Simon also worked.

Specifically the five men who were linked to the Fischbach mining industry were (with made-up translations of the job titles Schmelzer, Röster, Bergschmied):

They were part of the second and final era of success for the Fischbach mine, which had a fair number of ups and downs throughout the centuries. Here’s my potted history which I also wrote up in German for Wikipedia:

According to a document from 1461, copper mining in the valley of the Hosenbach creek near Fischbach dates back to at least 1400. In 1473, the two counts whose territories met on the hill above the mines signed an agreement to split all income from mining equally between them.

In the 16th century, the mines were thriving with up to 300 miners working there. Copper was sold beyond the region, for instance to Dinant (today’s Belgium), which was a centre of brass making. Due to the 30-Years War and the difficulties in maintaining the safety of the mines and the transport of the metal produced, mining ceased from 1624.

Mining was resumed at the Hosenberg site in 1697, but not in the sites on the opposite bank of the creek. From 1730 to 1765, the industry flourished once again. Johann Christoph Simon and his brother Johann Jacob Simon must have been in Markirch already (Johann Christoph married there in 1732 Around 1750 there is also the earliest evidence of the use of explosives in mining – even though the know-how was already developed half a century earlier in eastern German mining regions such as Saxony, and migration from those areas to Fischbach has been described by Bühler and Brandt. Between 1765 and 1776, the mining business went into decline, and in 1792, war forced its closure once again. Several attempts to revive it were undertaken in the 19th and in the 20th century, but all failed, due to high costs and low yields.

In 1975, the mine was opened to visitors. Guided tours around the impressive network of man-made caves are offered all year round. Above ground, there are also exhibits demonstrating copper smelting, as well as a sight-seeing circuit.

Back to the family history – Bühler and Brandt note that the Fischbach miners were highly respected professionals, as evidenced by the fact that they married into well-known families of nearby market town Kirn. However, my Fischbach ancestors and those in Kirn represent completely different lineages and cross-links between them have yet to be found. We have a few more generations of Simon ancestors, back to Mathes Simon, born around 1600 in Allenbach, but no details of what they were doing while the copper mine was closed. 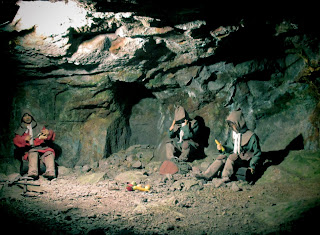 Fischbach copper mine with life-size figures of miners, own photo.