In my round-up of German pieces I mentioned my review of the film "Better living through chemistry" which was part of the annual April fun and games section in Nachrichten aus der Chemie. Here comes a shorter version of my thoughts on this film, in English:

One question puzzles viewers of this film from the beginning to the end: Why on earth is it narrated by Jane Fonda? I think I worked it out at last – she’s the agony aunt of some third class waiting room magazine and the question she’s answering this time is something along the lines of: “I spend my life being everybody’s doormat – can chemistry improve my life?” And, according to agony Aunt Jane, it can.

In the fairy tale that Auntie Jane tells us to make her point, she’s equipped the protagonist with a small-town pharmacy, to make sure he has a good supply of chemicals to experiment with. At the beginning, he doesn’t quite know what to do with that, other than quietly enjoying the intimate information he has about lots of people in the town.

In the course of an evening delivery to a posh address he meets a very conventionally attractive woman in a very transparent negligee, who describes herself as a trophy wife and complains of the terminal boredom that comes with this job. She has the bright idea that the pharmacists, who has “solutions for everybody but himself” might find the formula to change his life on the shelves of his workplace. The drugs work magic on him, lifting his love life, sporting achievements, and even his hair.

What else can you do with chemistry? Oh, yes, murder people. The chemically enhanced couple have a half-hearted go at that, but the scriptwriters (Geoff Moore and David Posamentier, who also direct) clearly shied away from the dark side and hastened to return to the safer ground of lesser crimes.

What is disturbing about the movie is its morality about drugs, reflected not only in Auntie Jane’s voiceover recommending misuse of prescription drugs but also in the reckoning at the end. Watch out who gets punished and who gets away. And perhaps you shouldn’t follow Auntie Jane’s advice. 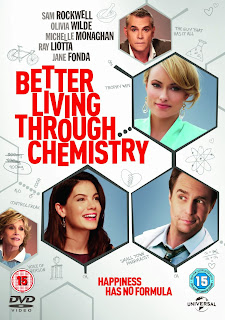 It appears the film went straight to DVD in Europe, and deservedly so.