Today there is a STEM / academia strike going on in support of Black Lives Matter, and even Nature is supporting it. So I'm not doing any science news today. Instead I'll use this entry to collect some local (and possibly wider academic) issues relating to the matter. Let's see what I can find.

Rhodes Must Fall - the statue at Oriel College has been the focus of attention after the toppling of Colston at Bristol, but there is Rhodes House, the Rhodes scholarships and all that. (Although personally, I am more offended by the building hidden behind Rhodes House, the Vere Harmsworth Library of the Rothermere American Institute. Both were named after an actual fascist and his lovely family clan, and not in a distant past, but in this century.) Here is a comment from an Oriel alumnus.

The Codrington Library at All Souls. Endowed by Christopher Codrington (1668–1710) with the spoils of slave work on sugar plantations in the West Indies. Then again, it's a library accessible to all members of the university, so we don't really want to burn it down. Maybe a shift of collection emphasis could do the trick?

A 2015 campaign to decolonise Oxford's curriculum. Which is where I found out about Codrington. Bit disappointing though, surely there must be many more skeletons in Oxford's closets?

The Black Boy in Headington - I discovered this pub and hotel when I was looking for a new pub to hold Galician sessions near the London coach stops, so I specifically looked around Headington. While the Black Boy looks nice from the outside and has a great location, the name put me off so much that I didn't even look inside. This local history page tells me that the niche above the entrance had a sculpture of a black servant until it was destroyed in 1990. Then there was painting of a chimney-sweep to replace it, now the niche is empty and there is an image of a black horse above, in an attempt to pretend the name doesn't mean what everybody understands it to mean. The name is old (documented in 1805) but not the first name this pub had, and the current building only dates from 1937, so history isn't much of an argument for keeping the name.

Update: Oxford Mail reports the owners of the pub will not change the name.

I hear the De la Beche Society at Imperial College is going to get a new name, considering that the patron, geologist Henry de la Beche (1796-1855) owned slaves in Jamaica. However, I am also told that he "inherited slaves and wealth from plantations yes, but abolished corporal punishment, gave them better working conditions, was criticised by other slave owners, and was not opposed to abolition." I gave a talk at the De la Beche society many years ago (on Life on the Edge), and have to admit that I only remember the name because I was amused by the literal meaning "of the shovel" which was very fitting for a famous geologist. 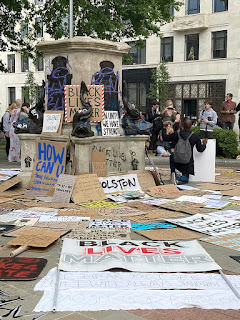 The empty pedestal of the statue of Edward Colston in Bristol, the day after protesters felled the statue and rolled it into the harbour. The ground is covered with Black Lives Matter placards.