New research shows how complex chemistry may be relevant to origins of life on Earth
Scientists would like to understand how life began on Earth. One popular model suggests life began when simple RNA molecules capable of copying themselves formed spontaneously in primitive environment. How this happened remains a vexing problem. New research by scientists from Earth-Life Science Institute (ELSI) at Tokyo Institute of Technology and the University of New South Wales suggests that simple organic compounds exposed to high energy radiation may be predisposed to form molecules like RNA.

Why the Victoria Plate in Africa rotates
The East African Rift System is a newly forming plate tectonic boundary at which the African continent is being separated into several plates. According to GPS data, one of those, the Victoria microplate, is moving in a counterclockwise rotation relative to Africa in contrast to the other plates involved. Now, researchers have found evidence that suggests that the configuration of weaker and stronger lithospheric regions controls the rotation of continental microplates and Victoria in particular. 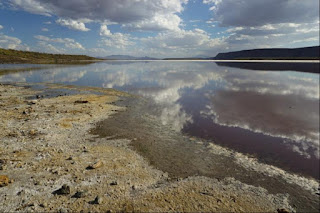 Clouds reflecting in lake Magadi, Kenya, located in the Eastern Branch of the East African Rift System. The high rising flanks of the Rift's border faults can be seen in the background.
Credit: Corinna Kalich, University of Potsdam

Temperate insects as vulnerable to climate change as tropical species

New study: Chemists at the University of Halle are able to induce uniform chirality
Chirality is a fundamental property of many organic molecules and means that chemical compounds can appear in not only one form, but in two mirror-image forms as well. Chemists at Martin Luther University Halle-Wittenberg have now found a way to spontaneously induce chirality in crystalline, liquid-crystalline and liquid substances, without requiring any external influence. The findings could be significant for the development of new active substances and for materials science.