Are planets with oceans common in the galaxy? It's likely, NASA scientists find

New Argentine fossils uncover history of celebrated conifer group
Newly unearthed, surprisingly well-preserved conifer fossils from Patagonia, Argentina, show that an endangered and celebrated group of tropical West Pacific trees has roots in the ancient supercontinent that once comprised Australia, Antarctica and South America, according to an international team of researchers.

African lion counts miss the mark, but new method shows promise
The current technique used for counting lion populations for research and conservation efforts doesn't add up, according to a University of Queensland researcher. But UQ PhD candidate Mr Alexander Braczkowski has been investigating new methods of photographing and data analytics to count lions that could be more widely used. "African lions receive immense publicity and conservation attention," Mr Braczkowski said."Yet their populations are thought to have experienced a 50 per cent decline since 1994 - coincidentally the same year Disney's The Lion King was released." 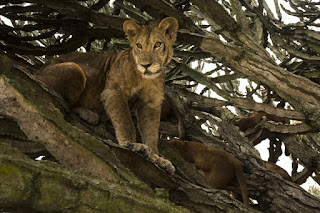 A young male lion rests in the branches of a large euphorbia tree. These trees are cactus-like but contain a poisonous milky latex. It does not seem to bother the lions.
Credit: Alex Braczkowski

The origins of measles: Virus diverged from cattle-infecting relative earlier than thought in history
The measles virus diverged from a closely related cattle-infecting virus in approximately the sixth century BCE - around 1,400 years earlier than current estimates - according to a new study of dozens of measles genomes.
Ooops. I always thought it was older than that, from early agriculture.

Uncovering the genetic basis of hermaphroditism in grapes, the trait that allowed domestication
Plant experts at UC Davis have defined the genetic basis of sex determination in grapevines, one of the oldest and most valuable crops worldwide. In new research Dario Cantu and Mélanie Massonnet propose a novel model of sex evolution before and during grapevine domestication nearly 8,000 years ago. Their work could have broad application in breeding grapes and other plant species.

Neandertal genes in the petri dish
Protocols that allow the transformation of human induced pluripotent stem cell (iPSC) lines into organoids have changed the way scientists can study developmental processes and enable them to decipher the interplay between genes and tissue formation, particularly for organs where primary tissue is not available. Now, investigators are taking this technology and applying it to study the developmental effects of Neandertal DNA.