Looking up to the stars can reveal what's deep below
Using a new technique originally designed to explore the cosmos, scientists have unveiled structures deep inside the Earth, paving the way towards a new map revealing what Earth's interior looks like.

Utah's arches continue to whisper their secrets
Two new studies from University of Utah researchers show what can be learned from a short seismic checkup of natural rock arches and how erosion sculpts some arches -- like the iconic Delicate Arch -- into shapes that lend added strength.

New insight into the Great Dying
A new study shows for the first time that the collapse of terrestrial ecosystems during Earth's most deadly mass extinction event was directly responsible for disrupting ocean chemistry. The study highlights the importance of understanding the inter-connectedness of ecosystems as our modern environment struggles with the devastating effects of a rapidly warming planet. 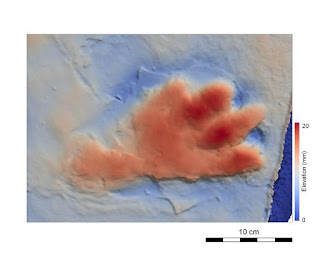 3D image of Batrachopus grandis, the new name for the footprint of a large bipedal Cretaceous crocodilian
Credit: Martin Lockley

Tiny pump builds polyrotaxanes with precision
Northwestern University researchers have developed the most precise way to build polyrotaxanes by using two artificial molecular pumps to install rings onto each end of a polymer string.


We can no longer ignore the potential of psychedelic drugs to treat depression
said Robin Carhart-Harris in the Guardian on Monday. (David Nutt and colleagues have been saying such things for many years, see my feature from 2013, it's just that politicians carry on with the pointless war on drugs and don't listen ... )