First egg from Antarctica is big and might belong to an extinct sea lizard
An analysis led by researchers at The University of Texas at Austin has found that a mysterious fossil discovered in 2011 is a giant, soft-shell egg from about 66 million years ago. Measuring in at more than 11 by 7 inches, the egg is the largest soft-shell egg ever discovered and the second-largest egg of any known animal.

Fish evolution in action: Land fish forced to adapt after leap out of water
See also my feature from January on the evolutionary switches of locomotion mechanism including transition of fish to land:

A changing mating signal may initiate speciation in populations of Drosophila mojavensis
When choosing a mate, females of different subspecies of Drosophila mojavensis recognize the right mating partners either mainly by their song or by their smell. New species apparently evolve when the chemical mating signal is altered and when, in turn, the signal is reinterpreted by the opposite sex in the context of other signals, such as the courtship song. 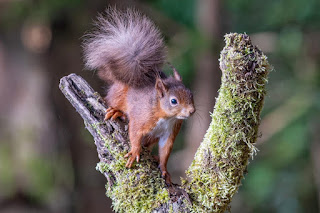 The number of red squirrels is on the increase in Ireland thanks to the return of the pine marten, a native carnivore, a new survey led by NUI Galway has found.
Credit: Poshey Aherne

A Neandertal from Chagyrskaya Cave
the 3rd high-quality Neanderthal genome


Envy divides society
Can class differences come about endogenously, i.e. independent of birth and education? Professor Claudius Gros from the Institute for Theoretical Physics at Goethe University pursued this issue in a game theoretical study. He was able to show that the basic human need to compare oneself with others may be the root cause of the formation of social classes.