Nine months into the plague year Bach project, I have stuck with the plan of studying one movement each month, but I have also accumulated a backlog of movements that I haven't quite managed to memorise. Therefore, I'll take the tenth month to fix some of the gaps before I move on with the front half of the third suite. Specifically, reorganising my revision list by the degree of success so far, I get three tiers (reminds me of something?!):

Re the movements and fractions of movements listed as "memorised": these I play at least once a week to check I still have them in my head and fix little problems here and there.

So for this month the main goal will be to shift some of the movements from tier 2 to tier 1. Starting with the bourrees, which should be no problem, and then I may also have time to complete the Gigue in C, which is great fun but quite long.

The Sarabande in C, last month's movement, may be hard to shift - while it is very short, there are far too many chords and shifts in this one. Took me all of November to memorise the first repeat, all of 8 bars long. Not a good sign. It also caused trouble with the Sarabande in G, as it uses some of the same chords in different sequence, so easy to get confused or to overwrite the memory of the first sarabande while trying to memorise the new one. 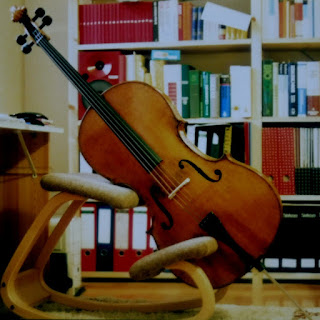 A freshly restored Heinrich in Regensburg, back in 1991.

PS To get the hang of the second bourree, I've been revisiting Inbal Segev's performance of the bourrees, which even has a christmas tree in it: