back to the beginning

On my crawl backwards through the first cello suite, I am now reaching the beginning, that famous Prelude. Which is to say I'm giving up on memorising the Allemande. While it isn't too difficult to play, I haven't managed to find a way of memorising more than the first seven bars (out of 32). I now think those brain cells are better used in completing movement 5 (the more memorable minuets) so I can play the second half of the suite completely from memory.

Moving on to the Prelude which is the most famous part of the suites, so there are even more performances and tutorials of this than of the other ones.

In addition to the trusted tutorial by Inbal Segev and the slow version from Cellopedia, there is also:

Yo-Yo Ma playing the Prelude at a Tiny Desk Concert and then talking about how he learned it as a child "one bar at a time" (inspired by this video, I tried that last year and got stuck in bar 10 - although back then I spent a lot less time on it than I do now). He started to learn it at age 4, apparently, Inbal Segev only at 6, maybe that's the number that determines your global success as a cellist?

Alisa Weilerstein deconstructing the prelude for an issue of the Vox Earworm series.

It has of course been played on many other instruments as well, as an example here is Ana Vidovic playing it on guitar which I think works really well. She has recorded all movements of the first suite but I feel the clarity of the guitar helps me more with the first three movements which I find harder on the cello. 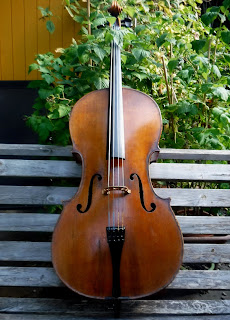 I was about to record something in the garden, but then a neighbour started playing piano ...


PS where next after the first suite? I guess I'll do the tail end of the third suite (Gigue and Sarabande) to complement the Bourrees which I've learned already, but suggestions welcome.