A courante is a running dance, of course, supposed to be played fast. In my effort to learn the Courante from the first cello suite, however, I don't think I'm getting past walking speed. Works for me - more time to appreciate the music - but don't try dancing to it.

The other problem with the courante is that it has more notes than I can memorise in a month, so I got about half way with memorising it. So I can play the movement at half the required speed and can play half of it from memory. Count it as a half-way success. Incidentally, I note that the person who used the score before me also made fewer annotations to the courante than to the other movements I have played so far. May have been running out of steam too.

Well, anyway, moving on, or rather backwards within the first suite, we now come to the Allemande.


Resources for this movement:

A slow version from Cellopedia is a helpful starting point as the fingerings are clearly visible at all times. And he plays at a speed that even I can manage (judging by the length of the video, it appears to be 2/3 the normal speed).

For a performance at the proper speed, try this recording from Denise Djokic.

And then consider the helpful hints from Inbal Segev. She's done a short tutorial (or two in some cases) for every single movement.Underneath this one there is also a list of helpful links and resources regarding the suites in general which I hadn't seen before. 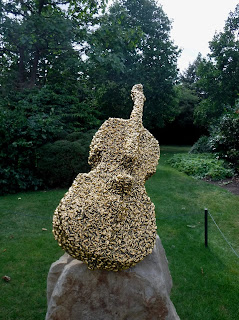 (Not our cello this time but an artwork I saw at a Frieze sculpture exhibition in Regent Park, London, last September)