As the UK is now steaming into a second Covid wave, I'm getting the opportunity to learn another Bach suite. In mid September, I completed my exploration of the first suite with an approximation to playing the Prelude. Then I had 2 1/2 weeks off in Düsseldorf without a cello (but with my grandmother's piano on which I am still more hopeless than on the cello), and now I am ready for the third suite (which is in C major, one of the three major keys I can almost handle). Of which I have already learned the Bourree 1 and 2, so only 5 movements left to do. Let's start at the tail end again, with the gigue:

I'm starting with Inbal Segev's musings, of course, but then there aren't as many videos to choose from as there were for the first suite. Let's try:
Ophélie Gaillard
Alisa Weilerstein
I'm also adding these videos to my youtube playlist "cello repertoire". 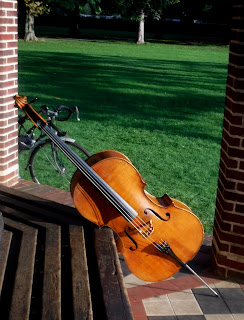 In September, Heinrich's first outing after six months of lockdown led us to the bandstand in Florence Park.