In the fourth month of the Plague Year Bach Project I managed to memorise the Sarabande from the first suite. At 16 bars total length, this movement is reasonably gentle on the poor old brain cells, but I had to get my head around the chords, which are plentiful and essential. Turns out they are all fairly normal, inoffensive chords, such as G major, C major, A minor, D major. Nothing I can't handle. I'm not entirely sure I understand the concept of a sarabande though - to me it feels like a glacier sliding down a mountain slope, so I don't quite feel the beat or imagine people dancing to it.

So onwards to the Courante (1.3), which has a scary number of notes at a scary speed, but also a bit more of a catchy tune. Wish me luck.

Resources for this movement:

A slow version from Cellopedia is a helpful starting point as the fingerings are clearly visible at all times. And he plays at a speed that even I can manage (at the end of July, once I've learned the notes).

For a more engaging performance at the proper speed, try this recording from Denise Djokic.

And then consider the helpful hints from Inbal Segev. She's done a short tutorial (or two in some cases) for every single movement. 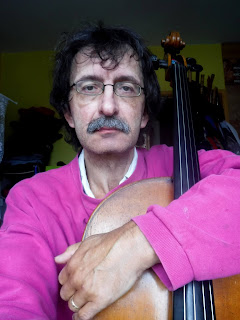