So in month two of the plague year I've found my way through the pair of minuets from the first cello suite, which is one of the easiest movements in the suites, so I reckon it's all uphill from here. I really love the first repeat of the second minuet to bits, I could play that all day and am developing a kind of deja vu illusion in that I am wondering if that tune hasn't been used in some French chanson that I used to know as a child. Maybe not, but somebody should have made a song out of that one.

Anyhow, upwards and onwards to the gigue of the first suite (movement 1.6).

The video of Patrycja Likos is a helpful starting point as she plays the movements very straight and the fingerings are clearly visible at all times. One could almost learn the piece just by copying her moves.

And then consider the helpful hints from Inbal Segev. She's done a short tutorial (or two in some cases) for every single movement, which is quite something.

Every other day I still listen to the complete first suite on soundcloud by Mischa Maisky. (I also have the complete suites by Rostropovich on CD but am beginning to spot artistic choices in there that I don't like that much. Will definitely buy Segev's recording when Blackwell reopens.)

Oh, and I ordered a study book about the first suite online which should arrive next week. Watch this space. 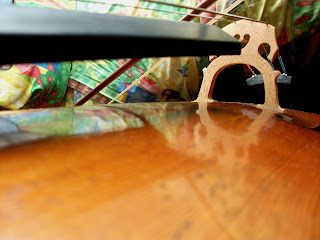 I like reflections and bridges ... and I sometimes take random photos of our family cello, which now come in handy.
Posted by Michael at 11:50 AM