It may be months before people can go out and play music together (before then we could perhaps launch street orchestras with one parking space per person?), so it's a good time to study JS Bach's unaccompanied works which are a bit like playing chess against yourself, as there are various voices, or solo plus accompaniment, all to be played by one person with one instrument.

In the last two years I found my way through JSB's partita for flute and also his son's response, CPE Bach's sonata for unaccompanied flute, also in a minor. So now, faced with the complete lack of ensemble opportunities, I'm tackling the cello suites, which are a somewhat bigger mountain to climb. I started with the bourrees from the 3rd suite (movt. 3.5), and got the hang of them in a month. (So at one movement per month, the suites will keep me challenged for three years, by which time it will hopefully be safe to play in ensembles again.)

Next stop: the minuets from the first suite (movt. 1.5). I understand this is one of the easiest movements (it has been an exam piece for ABRSM grade 6 at one point). Not sure in which order to proceed after that, but in a forum I've seen a cello teacher suggesting to go through the first suite back to front, so I might do that. Helped by the fact that the second-hand copy of the score I bought at a charity shop for £ 1.50 has fingerings and annotations pencilled in for the entire first suite as well as for movt 3.5. So far these markings have worked very well for me, so I am very grateful to the previous owner for this help.

Patrycja Likos version is a useful starting point as she performs it straight and the the fingerings are very clearly visible at all times. 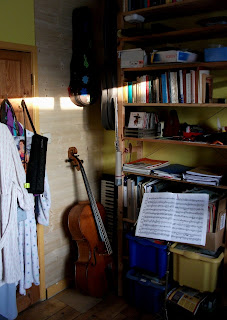