Now a second lockdown is coming our way, so there will be plenty of quiet time to learn a second sarabande. The Bach project (36 movements in as many months) doesn't look quite as crazy now as it did in March. Although I also got to play tunes outdoors and with other people every once in a while, a couple of times under the remarkably reflective roof of the band stand in Florence Park.

I enjoyed the Gigue in C, which was my movement for October, and managed to memorise almost half of it, might get the other half into my head at some point, as it repeats many of the patterns I already know from the first half. I have now managed to memorise what was missing of the minuets from the first suite, so I can sort of play from memory the movements 4-6 of the first suite, along with most of the Courante, one of the Bourrees and bits of the others.

So onwards (or backwards, rather, as I did with the first suite) to the Sarabande in C. I'm starting with Inbal Segev's musings, as always, and I found recordings from:
Ophélie Gaillard
Alisa Weilerstein
I'm also adding these videos to my youtube playlist "cello repertoire". 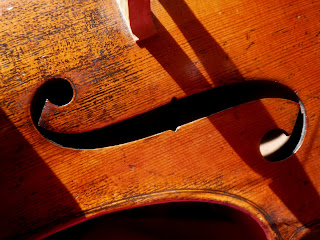