today, for the first time in my life, I used Google to locate an item in my own room. And it worked.

Explanation: I was looking for an article I'd written on the Gates foundation funding initiative for malaria. All my articles are nicely filed in 5 big lever arch files, chronological order, on my shelf. Trouble is I remembered the title but couldn't remember which year the piece appeared (for most pieces I vaguely remember the year and the season), so it could have taken me some time to go through the publication lists or the files.

So I googled for the title, found the year and had the piece within 2 minutes. Magic.
Posted by Michael at 11:13 AM 0 comments

Britain has had the biggest earthquake since 1984 and I slept right through it, didn't feel a thing. At 5.2 it's not much to people in places with proper earthquakes, but here we're used to have smaller versions of everything: summer, winter, tornadoes, etc. and talk about them as if we had the real thing.
Posted by Michael at 2:07 PM 0 comments

Nearly 14 years ago, I wrote a news story about the successful incorporation of genes for a blue pigment into roses, assuming that the new variant would hit the shops soon after:

in fact it hasn't been commercialised to this day, but I have read in the press this week that the blue rose is now, 14 years later, almost ready to go on sale. The company Suntory Ltd. is currently growing test batches (which most observers consider to be purple rather than blue). Crikey, and I always thought my research projects went a bit sluggish ... 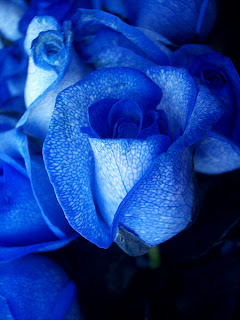 This one's a fake, borrowed from Wikipedia
Posted by Michael at 1:34 PM 0 comments

I'm checking the page proofs and preparing the index for my forthcoming collection of science stories,

The birds, the bees and the platypuses

So it's all happening, and we're on track for publication in May (Europe) and in July (US). More news on this book to follow soon.

PS, if you haven't seen it yet, the cover is in the column at the right hand side of this page, underneath my profile.
Posted by Michael at 11:08 AM 0 comments

Much of what was said this week about Cuba in the wake of Fidel's resignation was of course unpalatable for someone who believes in a society not driven by runaway greed. But here are some pieces that I found readable / relevant:

A very nice paper appears in today's issue of Nature, using supramolecular chemistry to create a small-molecule rubber. As it relies on hydrogen bonding where ordinary rubber has covalent bonds, the material has a remarkable ability to repair itself after cuts and breaks, even if repeatedly cut at the same place.

Now I wonder how long it takes until I can get bicycle tyres made from that material ...
Posted by Michael at 11:40 AM 0 comments

how to climb up the wall

If you're dreaming of walking up vertical walls effortlessly like a gecko, your special day may have come closer. Researchers have developed a sticky tape that fulfils 5 out of 7 criteria characteristic for gecko-like performance.

Meanwhile, a separate research effort is directed at developing gecko-inspired adhesives for wound repair. Read my news story in Chemistry World (free access for all).
Posted by Michael at 11:20 AM 0 comments

The only sustainable biofuel is used chip fat, concludes George Monbiot in his latest Guardian column. While I agree with him on most things, I wouldn't go quite as far as that (yet). While not all biofuel programs based on agricultural waste are truly green (he cites an example of waste that would normally be scattered on the fields and help to avoid erosion), there are lots of different kinds of agricultural waste in different parts of the world, and I am sure that for some of them it makes perfectly green sense to turn them into biofuel. Such as the bagasse, a waste product of sugar cane, which the Cubans are turning into ethanol. Or wood chips in Scandinavia.

I think these need to be considered one by one, even though the one green option that is available to all people in all places, is to use less fuel. But that, of course, runs counter to the economic growth that we are so addicted to.
Posted by Michael at 3:38 PM 0 comments

excellence to the max

Last year, German science celebrated the "excellence initiative" and two Nobel prizes, but by now the hangover has set in, and debates over the right way forward have flared up. I've written a news feature for Current Biology on the recent debate over the role of the Max Planck Institutes.
Posted by Michael at 1:02 PM 0 comments

what's the worst that could happen?

I'm not sure whether the European Union needs a "president", but if it does, who would be the worst candidate one could imagine?

Which former leader of a EU country has harmed EU cohesion by keeping his country out of the Schengen treaty for free travel and out of the Euro zone, has promoted the accession of countries that make the EU wider but shallower, has steered his country so close to the US that it appears the English Channel is now wider than the North Atlantic?

Well, yes, you guessed it, the answer is Tony Blair. So when his name came up as a possible EU president some time last week, I had a very hard time trying not to bump my head against the nearest available wall. I've always considered myself a European citizen, but if he gets to run this place, I'll have to emigrate to Africa.

Luckily -- so we don't have to feel quite as powerless -- there is an online petition to stop Bliar from getting the EU job. In true European spirit you can read the petition in virtually every language spoken in the EU. I think I've never signed an online petition before, but I've signed this one as soon as I heard about it.
Posted by Michael at 11:19 AM 0 comments

love in the time of waiting ...

The hardest time for the Shakira-addict is of course the 1.5 years from the end of a tour to the release of new material. This time round the wait has been made more bearable by the Love in the time of cholera movie soundtrack including 3 songs of hers, two new ones and one recycled from Pies Descalzos.

A CD of the soundtrack is already available in the US and will be released in the UK next Monday, 18th of March. 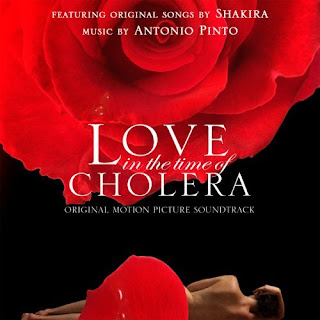 Happy Valentine's day to all !
Posted by Michael at 10:15 AM 0 comments

biodiversity in the vineyard

As I mentioned earlier, Earthwatch has a new project in this year's expedition guide, which looks at biodiversity in the vineyard and at ways in which increased biodiversity can be used to protect the crop.

I've now done a short feature in Current Biology about this project. Sadly I haven't had time to investigate the matter in situ.
Posted by Michael at 10:21 AM 0 comments

... and the automatic coffee taster

Now I'm beginning to worry. Is there anything left that I can do but robots can't? Come to think of it, how many of the zillions of bloggers out there are real people and how many are computer programs ?
Posted by Michael at 12:43 PM 0 comments

If you read a book that feels as though it was written by a robot, nowadays, chances are that your hunch is exactly right. I learned from this column by Improbable Research editor Marc Abrahams that a prof called Philip M Parker has patented a device to author and market books. Thousands of them. At an unbeatable price of 12 p per title (although the customer eventually pays a lot more for the book).

If you don't believe me, do an amazon search.

Right now there are more than 85,000 search results, and the best-selling title is:

dusting down the book shelves

I'm at the moment cleaning up the book pages of my web site. Using the slightly improved design of the new pages created for The birds, the bees and the platypuses, I've now blown the cobwebs off the pages for Astrobiology, Light and life, Lust and love as well and may keep working my way down the list, unless I get too bored with that.

I shouldn't click around on my own website, really, I always discover lots of things that need fixing ...
Posted by Michael at 1:54 PM 0 comments

Ever since I plugged the book "lust and love" in my blogs a few days ago, I'm getting more interesting ads displayed on facebook and myspaces. So I'll keep on plugging it.

Second excuse, I forgot to show the cover: 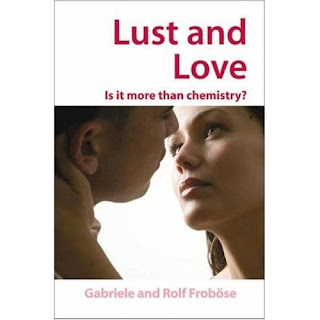 So order it now, in time for vee day. Click here for details
Posted by Michael at 2:37 PM 0 comments

Oxford University's PR people have recently set up a regular Oxford Science Blog which looks quite interesting, and is certainly something I should keep an eye on.

During the interview season (December) there is also a blog about the admissions process which makes interesting reading, even though it probably won't make the process less scary for those involved.

Oh, and then there is the blog of the Principal of St. Anne's College.

And Anthony Lilley, being a visiting prof for media and stuff must have a blog too.

Should we rename the place Bloxford ?
Posted by Michael at 10:00 AM 0 comments

As the old saying goes, men need "Wein, Weib und Gesang", i. e. wine, women and singing, to keep themselves amused. In the round-up of my German publications for February, there's wine and singing all right. Shame that the long-haired creatures that complete the triplet turn out to be bacteria ... 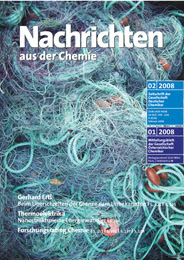 As Valentine's day is approaching fast, I have updated my Cupid's chemistry pages, which contain details of the book "Lust and Love -- is it more than chemistry?" by Gabi and Rolf Froböse. I translated and edited this book based on the German original.

So if you're still looking for a V day present for that loved (and/or lusted) person in your life, check it out.

I also did a feature article called Cupid's chemistry a couple of years ago. One day, I'll write a book of my own on this topic, just need to do some more field research ...
Posted by Michael at 10:54 AM 0 comments

an apple a day

The lives of mathematician Kurt Gödel and computer pioneer Alan Turing are the subject of a slightly fictionalised biography, reviewed here.

Lots of things I didn't know about them -- have a biography of Turing sitting on the shelf unread and managed only a third of "Gödel Escher Bach" back in the 80s when it was all the rage.

Most shockingly, I didn't know how Turing killed himself: as he was obsessed with Disney's Snow White, he bought a red apple every day. The last one he injected with cyanide. What a story.

I've now put together the web pages for my forthcoming book:

The birds, the bees, and the platypuses,

which is a collection of my favourite science stories of the last 15 years, with some comments, revisions, updates.

The web pages include a summary, table of contents, and the preface.

The book is due to be published in Europe in May, and in the US in July.
Posted by Michael at 11:15 AM 0 comments 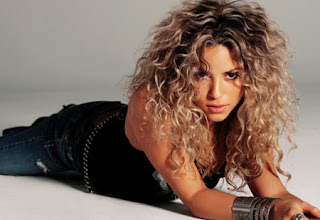 There are lots of exciting things going on in DNA nanotechnology these days -- see for instance the cover of this week's Nature, which I am hoping to deal with at a later point. For now I have a little news story on the "DNA crane" developed by the group of Hermann Gaub at Munich:

A DNA crane for molecular building sites
Posted by Michael at 9:48 AM 0 comments