Back in October, I attended the Earthwatch debate on rewilding, which offered an interesting range of perspectives on the issue - and was followed by an enthusiastic audience with a majority in favour of reintroducing carnivores like lynx and wolf to the UK.

I've distilled my impressions into a feature which is out in Current Biology today:

How wild do you want to go? 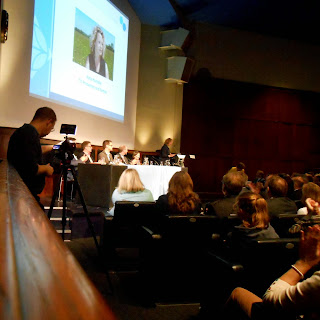 (My own photo of the event, Kate Humble giving the introductory speech.)

... I'm actually short of a candlestickmaker in this story, but I have a few other interesting trades, so bear with me:

Until around a decade ago, I believed I was the first person in the family to be born in the small town of Kirn, by the river Nahe. While 3/16 of my ancestors hail from the surrounding hills of the Hunsrück, they seem to have studiously avoided the river valley with the towns Oberstein, Kirn, Sobernheim, and Kreuznach.

Then we discovered one ancestor who was born at Kirn more than 300 years before me (in 1654, to be precise), and she turned out to be related to the Andres family, who went on to found the local brewery (Kirner Pils), which is still thriving today, bucking the trend that has seen much larger companies dominating the beer market. They do make very good beer, as well, so I’m glad they’re still there (and still in the hands of the Andres family).

After pulling various threads attached to that family we have now got a whole network of ancestors who were crafts and tradesmen in Kirn, going back to the mid-15th century. There were butchers, bakers, tanners, weavers, plus the extinct profession of Schleifmüller, which I’ll explain below. For two centuries they had a thriving small town economy there – even though Kirn only officially became a town much later (1857) and the inhabitants had to pay to get their freedom in 1600. Then, however, the plague arrived in 1606, closely followed by the 30-years war (1618-1648), devastating the whole community. During the war, the number of households in Kirn fell to one tenth of what it had been before (230 to 22). Just after the war, as some refugees returned, there were 74 households, and the population would take until 1800 to recover, by which time my ancestors were long gone.

Here are, in chronological order, some of the things we think we know about our ancestors in this little community in its heyday until darkness fell.

In generation 17, born between 1440 and 1470, we have three households. Henn (Henrich, Hen) Kub (Koben) married Katharina Hensels around 1465. Not sure what they did for a living, but from the next generation onwards the Kubs are bakers, so let’s assume that. From 1481 to 1488 Hen Koben was mayor (Schultheiß) of Kirn. He lived in a house in the Adelsgasse that will later be home to the Creutzer family, below. Today this street is called the Nahegasse, and it's the tangent on the West side of the market square, so it's at the very heart of the historic centre of the town.

Second, a tanner called Steffen, which in some sources is given as his last name and in others as his first name, with Lauer, an old-fashioned word for tanner, as the last name. At this time, the use of family names was still fluid, and we have several examples of people switching between their father’s first name, their profession, and a nickname, as a family name. Steffen’s daughters called themselves Lauer, so let’s stick with the name under which you’ll find him in GIB, i.e. Stephan Lauer. His wife is Katharina (Ketter) Wöllenstein (Wolfstein, Wellstein), they married around 1495. (Strictly speaking, we don't know where this family lived - research is ongoing.)

Third, a “Schleifmüller” called Contz Schmidt, meaning he had a water mill and used the power to sharpen tools and possibly swords as well. People working at a Schleifmühle were also referred to as smiths, so his last name may reflect this. He obtained a heritable leasehold for his mill in 1468 – this is the earliest firmly established date in all of our family history. While there is nothing left of the mill, the millstream is still there, so one can guess the location.

One generation down the line (born 1470-1490), we have the descendants of the above plus a few newbies. New kids on the block in generation 16 are the tanner Hen(rich) Culmann and his wife Catharina Treger.

Henrich Kub’s son was a baker called Hans Kub, but he seems to have kept a low profile, as that is all that we know about him.

The tanner Stephan Lauer had two daughters whose first names we don’t know. The one we care about married another tanner called Lauer, Simon Lauer, who came from Gemünden, some 20 km north of Kirn in the Soonwald, and by the Simmerbach which joins the Nahe just downstream of Kirn.

The other Lauer daughter married a man called Wöllstein (note the similarity to her mother’s name, Wöllenstein, but no link established yet), and went off to Becherbach, just a few kilometres south of Kirn, where she had a daughter, who would later marry her first cousin, the son of the older Lauer girl and Simon Lauer, called Johannes Simon – where, again, the father’s first name became the family name for a lineage that remained present in Kirn through to the 20th century.

Contz Schmidt had three sons, one of whom called himself Theiß, which became the family name of his descendants, and which is now quite a widespread name in the area. Of interest to us, however, is the first-born called Conrad Schmidt, who expanded his father’s business. In 1524 he is recorded as the owner of two mills and a house in the Steinweg, the northern extension of the Adelsgasse.

In Generation 15 (born 1500-1520) we have three households, and as we are following the daughters of the smiths and the tanners, we are saying good-bye to these professions and focus on food production.

Around 1525, Eulalia, the daughter of the tanner Hen(rich) Culmann and Catharina Treger married the earliest known male ancestor of the Andres lineage (of brewery fame) to show up in Kirn, a butcher who is variously also known as Endres Metzler (referring to his profession). Eulalia was the oldest of five children, who all went on to have their own families. Two of the sons became butchers under the family name of Pass, which was their father’s nickname. Of the at least 16 grandchildren of Culmann/Treger, one marries Hans Theiß, grandson of Contz Schmidt, another Johannes Simon, grandson of Simon Lauer. Both marriages are not part of our relevant lineages, showing that there are multiple cross-links between these families.

The Kub kept their passion for baking, as Adam Kub was a baker like his father, and he married Anna Simon, daughter of Simon Lauer and the nameless older Lauer girl.

Finally, the nameless Schmidt girl married another baker called Ulrich Emich. Now that is an interesting name, because the former lords of the Kyrburg, the castle overlooking the town, came from a family whose firstborn sons were called Emich throughout the 11th and 12th century. I need to investigate what exactly it means when this name turns up as the family name of an ordinary citizen two hundred years later. Confusingly, another Ulrich Emich worked at the castle around the same time, and there have been earlier Emichs in the services of the counts of the Kyrburg, specifically Wilhelm Emich was Sekretarius there 1568-1577, and as a reward for his faithful service, he received a house in the Steinweg, close to where the Kub and the Schmidt people mentioned above lived as well, which could count as circumstantial evidence that he is in fact linked to these townspeople.

Ulrich Emich later (around 1570) married a second woman, who is called Wellstein in one source and Anna Wolfstein in another (AIS). The latter source claims that she was the mother of the Emich daughter we’re interested in, but if the marriage date is correct, this would appear implausible, so we’re sticking with the Schmidt girl. (Although the Wellstein ancestors reach one generation further than the Schmidt ones and yield another person resident in the Adelsgasse.)

The woolweaver is a new arrival called Jean (Johann) van Dham (later: Dammi) from Malmedy, a town near Liege, in today’s Belgium (then it was a small church territory), or possibly from St. Vith, in the district of Malmedy. Von Dhams lived in St. Vith over many generations, but are believed to have come from Fels (Larochette) in Luxembourg originally. Intriguingly, there is an earlier von Dann family of wool weavers recorded in Kirn from 1530 onwards, and I have a suspicion they come from the same source.

The nameless daughter of the other baker, Ulrich Emich, married the butcher Jakob Creutzer ,who lived in Hen Kub's house in the Adelsgasse. They had three children in 1580-1585, but she must have died then, as he married again and had another three children with his second wife.

The immigrant wool weaver brought along a son called Hans Dammi, who worked as a cotton weaver. He married Elisabeth, the widow of Urban Welsch, who was also a wool weaver, but we don’t know her background. The name Welsch also points to a migration background, it essentially meant “foreign”, and one online genealogy claims that he is also from Malmedy, so at first I thought he may have received the moniker on arrival at Kirn. However, as the Malmedy area was also German speaking, and there are Welsch families in that area to this day, I now think that the name is due to an earlier migration event and he already lived in Malmedy under that name, which would be helpful in tracing down his family connections there. After Hans Dammi’s demise Elisabeth married a third time in 1614, this time the lucky man was another wool weaver called Matthes Wilhelm.

While the Andres sons march on to butcher shop, inn-keeping, and finally beer brewing glory, we follow daughter Anna Margareta Andres who marries the weaver Johann Dammy, son of Hans.

They seem to have been of the robust sort – having lived through the thirty-years war and a return of the plague, he reached the age of 78, and she was 80 or 81 years old when she died in 1700.

Johann Dammy was mayor in 1676 (it was obviously the thing to do, in those circles). A local historian also mentions that after the war ended in 1648, and there were no funds to restore the public bath houses by the river, Johann Dammy rented the huge copper kettle that had become redundant and used it to dye his fabrics.

The couple only married in 1651, when they were both well over 30, but given the hardship the town suffered in the thirty-years war, they probably waited to make sure that it was really safe to do so. They had five children born in 1652 and 1666. The second of them, Elisabeth, was the last of my direct ancestors to be born in Kirn. In 1682, she married Matthes Wilhelm Schüler, an innkeeper in Kirchberg, and moved there. Although her brother Johann Jakob Damme had several sons, the name disappeared from Kirn, no person with this name appears to have been born there after 1700.

The tanners, including the Simon family, also went on to do well, and in the 19th century, leather factories became one of the key industries of the town. 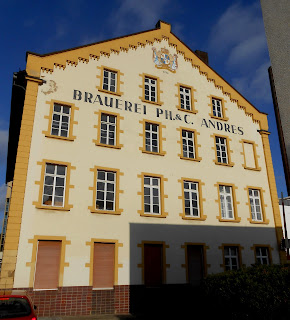 One hundred years after completion of the Panama Canal, plans for a new, larger shipping route across Central America is dividing opinion. In my latest feature I have looked both at the economic opportunities for one of the poorest countries of the area, and at the dangers to biodiversity and ecosystems.

Will the Nicaragua Canal connect or divide? 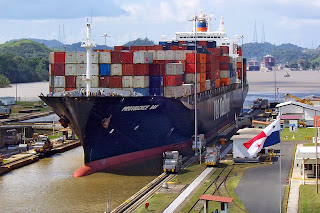