can Pythagoras take a shower?

During a recent stay at a cosy little hotel in Germany, we had a shower cabin with a square footprint (ABCD) and a sliding door (ab) that operated such that its endpoints a and b slid along the sides of the square, so point a moved along AB, while point b moved along BC.

Answers on a postcard. (This really happened, and the young mathematician in the family worked it out. However, I suspect that somebody, eg Martin Gardner, must have come up with this riddle before.)

good bye to the Holocene?

The Holocene, which began around 11,700 years ago, has been an unusually stable and benign period in Earth's climate history, and with its equanimity it has enabled Homo sapiens to spread around the world and build our modern civilisation. Now, however, evidence suggests that our own economic activities have killed off this geological epoch that saw (and facilitated) the rise of our species to world domination.

As an official working group is pondering the case for declaring a new epoch, the Anthropocene, two separate assessments of the damage we have caused to the Earth system have been updated and improved.

All this is covered in detail in my latest feature in Current Biology, which came out on Monday:

Every self-respecting family tree needs a Huguenot ancestor. Our best bet for this is Johanna Bondam (Bodang, Bondamm, Pondam, Bontam), the mother of the emigrant Johannes Klundt, who left the Palatinate for the shores of the Black Sea and left descendants around the world.

Maria Johanna Bondam, protestant, was born in Mörlheim (today a part of Landau town) around 1735 as one of at least three children of Johannes Bondam and his wife Maria Sara, last name unknown. Her older sister Maria Eva Bondam (born at Mörlheim as well) went on to marry a Jacob Frary of Swiss descent and went on to have nine children. Her descendants are listed on GedBas. The younger brother Pierre Bondam was born in 1737 at Billigheim, a few kilometres south of Landau.

Now both Mörlheim and Billigheim are not just any old villages in the Southern Palatinate. Mörlheim was the first place in Germany where Waldensians from the Piedmont (then part of the Duchy of Savoy, now in the northwest of Italy) settled after they began to be expelled from their home region. There is a whole book about the trek of the Waldensians from the Alps to Germany with a big chapter about Mörlheim, complete with lists of inhabitants of the manor, which had been founded in 1148 as a subsidiary to the Cistercian abbey of Eußerthal.

There were originally only three or four families of peasants working there, but in 1655, 15 families of Waldensians arrived, with 60-70 people in total. In the privileges set out for them by the prince elector, it is specified that there should be at least 40, but no more than 1000 families of settlers. They moved into the abandoned buildings of the abbey, which had been dissolved with the reformation in 1560. The first list of settlers, consisting exclusively of Waldensians from the Piedmont, does not contain a Bondam person.

But further fugitives arrived, as the colony began to thrive. The settlers planted mulberry bushes and produced silk. By 1670, there were around 100 families represented by a council of 12.

However, most of these fled when French troops advanced in 1688/89, although the invadin troops ended up using the former abbey for storage and didn’t destroy it. In the spring of 1691 some of the refugees returned, along with a few new settlers, among them our Jean Bonnedame. He is listed among the group of 11 new arrivals as owning 1 Pflug (i.e. around 20 hectares) of land.

The next round-up, made in March 1699 on the occasion of a lawsuit against the lease holder of the land, who apparently tried to cheat the peasants out of their land and possessions, lists Jean Bonnedame among the group of “Walloons, Huguenots”, kept separately from the Piemontais. In 1697, a group referred to as “the Walloons” left the place due to the animosities surrounding the lawsuit. This group includes two from the five people named in the Walloon/Huguenot mixed list but not Jean Bonnedame, so we conclude that he was one of the Huguenots (of which there were only three left at most, after deducting those identified as Walloons).

Considering that Jean Bonnedame was listed as a grown-up in 1691, so must have been born no later than 1670, he will have been too old to be Johanna Maria’s father in 1735 and is likely to be her grandfather.

At the same time, Billigheim was also a place that hosted refugees persecuted for religious reasons. The church records from the 17th century are lost, but in 1699 there was also a Bonnedame person living there, so the family appears to have been split between these two locations, which might explain why Johannes Bondam’s family seems to have moved from Mörlheim to Billigheim before the birth of their son in 1737. Also, there is a Jakob Bondam who was born at Mörlheim in 1720, but his father was called Wilhelm, so the connection to our Bonnedames isn't very clear at all. (To confuse things further, there is a prominent Dutch historian called Peter Bondam (1727-1800), but I don't know where his ancestors came from either.)

So, we’re still not entirely clear what happened there, nor where the Bonnedame families came from prior to 1691, but I think the case for a Huguenot ancestry is growing stronger. As always, any hints appreciated. 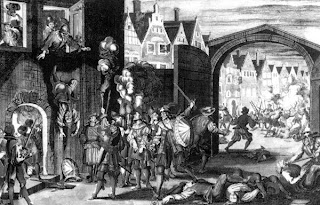 how to burst the filter bubble

Review of The Filter Bubble
by Eli Pariser
Penguin 2011

Last year, when the publication of a psychology experiment conducted on facebook highlighted the dubious ways in which the company manipulates people’s timelines, some clever observers remarked that this wasn’t really new, and it was all described in Eli Pariser’s book. Which, amazingly, was the first time I heard of the book.

Having picked up a copy for £ 2 on the flea market (somebody clearly thought it was no longer relevant) I’ve now read the book. Essentially it confirms my hunch that the internet took a turn for the worse when the major global monopolists amazon, google and facebook personalised their services and started to pretend that they know which books I want to read, which search results I want to see and which ads I might be interested in. The resulting limitation to what one can see of the internet is the phenomenon that Pariser calls the filter bubble.

Pariser explains very eloquently why this is bad news. It’s bad for creativity, because it removes the possibility of serendipitous findings and unexpected connections (which are basically the things that pay my mortgage, so bad news for me especially!). It’s bad for democracy, because people only surrounded by the opinions they agree with and the friends that have similar views will fail to see that there may be another side to the argument. The anti-Islam movement Pegida in Dresden and other German cities originated as a Facebook group –although long after the Filter Bubble was published. And far from fulfilling the internet’s early promise of distributing power to the people, the application of opaque filtering methods concentrates unseen and unaccountable power in the hands of a small number of global companies.

What can we do about it? One can’t completely opt out of it, as an increasing number of services would just stop working if you chose to block all cookies. Pariser says companies should be open about what kind of filtering and personalisation they apply to any given product. But seeing that the key players hold quasi monopolies, what are the chances that they will comply with Pariser’s wish? Four years after his book was published, I haven’t seen it happening, and the affair around the Facebook experiment seems to suggest they are still blissfully unaware of the problem. Governments could perhaps legislate to enforce more openness, but then again, they never understood the internet anyway, and are already failing to make the companies pay their taxes. Not much hope there either.

Which leaves only consumer choice. I have always preferred social sites with an element of anarchy and randomness to facebook with its emphasis on real names and real friendships. Pariser, although he admits to enjoying facebook as much as the next person, praises twitter for its unfiltered timeline and clarity regarding where filtering is applied. For instance, in searching for hash tags, you can choose between “top results” and “all results”. I would add tumblr to that recommendation, as it also has an unfiltered timeline and the most amazing random people on the planet. (As far as I know, my 1260 followers on tumblr include only one person I have met in real life.) And if you do use Facebook (as I grudgingly do once a week), make an effort to venture outside your bubble. Befriend random people, do unpredictable things. Confuse the algorithms.

Similarly for search, try to think beyond Google, maybe use several search engines. I use duck duck go as default, and only resort to versions of Google when I need results in a different language, so for instance, google.de for family history explorations in Germany. Google’s bots must think that I’m only interested in dead people.

As for amazon, as I’ve explained before, they haven’t managed to figure me out in 15 years, and I don’t think they ever will. It would take a human being to actually read what I write, and they only have computers. So my remedy is: be wide ranging and unpredictable. Surprise yourself and the algorithms. Burst the filter bubble. 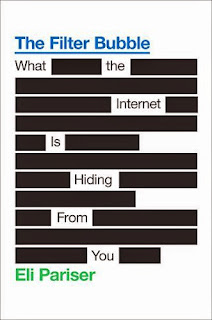 In the round-up of German pieces published in January/February it's mostly about light, so we have photosynthesis, seasonal affective disorder, UNESCO's year of light. Along with that a bit of chemistry bang in the shape of Knallgas bacteria and a new synthesis approach:

I covered the problem of plastic waste in the oceans two years ago, but as research on the interactions between the plastic materials and the affected biosphere is beginning to emerge, I wrote a new feature, now more focused on microplastics and their biological impact. This has just appeared in Current Biology: 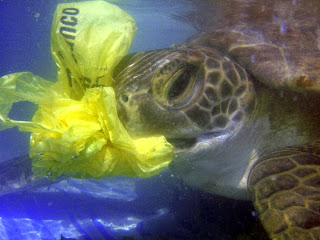