When I reported on the suspected Huguenot connection of my ancestor Jean Bonnedame (* 1666 Mörlheim, today part of the city of Landau) , I didn’t know the last name of his wife, Maria Sara, whom he married in 1724. We now know that she was called Maria Sara Bouquet, (*1699 Minfeld).

It turns out that her family appears to be of Huguenot origin as well. Specifically, her father Philipp Bouquet was probably born around 1655 in the pays de l'Alloeu, a small patch of land just west of Lille (today in north of France) which originally was one of the provinces of the Spanish Netherlands. He came to the town of Billigheim (in the Palatinate, just south of Landau), which had a significant population of Huguenot refugees, with his father Laurent Bouquet (Boquai) in 1664. We don’t know anything about his mother. In 1685 he married Christina (last name unknown) at Archenweyer near Billigheim. Their son Isaac Bouquet was born in Archenweyer in the same year.

Like many other Huguenots, the Bouquets followed the invitation from the Duke of Prussia and moved on to the East, to the Uckermark area around Prenzlau in 1686, and were still there in 1690. (A list of residents confirms there were no Bouquets left behind in Billigheim by 1692.) However, there are no family events recorded in the Uckermark and by 1699 they were back in the Palatinate, where Philipp was administrator (Hofbeständer) at Minfeld. Sara Bouquet was born there in December 1699. Philipp Bouquet died on the Baltic island of Rügen, which must have been in Swedish possession at that time. We have no idea how or why he got there, so any clues appreciated. Christina died at Mörlheim in 1733.

There are a few Bouquet (Bocquet, Boquai, etc.) families documented in the area that is now the region Nord/Pas de Calais, but most are catholics, so ours are the black sheep. If anybody knows anything about protestant Bouquet families in that space and time, all hints would be much appreciated.

A couple of generations down the line this means that the couple that emigrated to the Black Sea, Johannes Klundt and Eva Maria Hust, may both have had quite a lot of “migration background”. Johannes Klundt has three grandparents of suspected French or Swiss origin. The odd one out is Anna Apollonia Schmitt. And the name Hust may also be of French, ultimately of Hungarian origin. 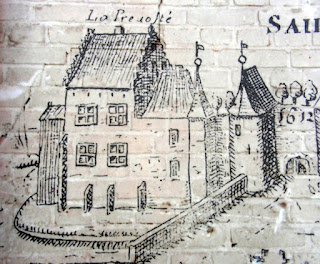 Sailly sur la Lys - one of the four towns of the pays de l'Alloeu.

The upcoming climate conference COP21 at Paris (which I hear will go ahead despite the recent attacks) will reveal whether or not our civilisation can deal with the challenge of man-made climate change. To mark the occasion, I've had a look at how nature suffers from, responds to or copes with climate change. The resulting feature is out now: 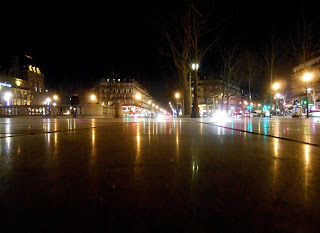 Researchers at the Center for Chemistry at the Space-Time Limit (CaSTL) are using a whole range of fascinating methods to achieve visualisation of molecules at the time and space resolution that is relevant to molecular bonds and reactions, i.e. 0.1 nm (Angstrom) and femtosecond. In an attempt to understand how they do it, I wrote a feature about what they call "the chemiscope", which is now out in the November issue of Chemistry & Industry: 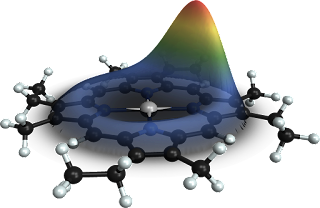 The same issue also contains a book review on page 49 - not exactly a recommendation, so I won't name the book here.

A recent report from the European Marine Board looked into the question of whether and how the economic opportunities present in the as yet unexploited deep ocean could be used in a sustainable way. The short answer is, we don't know nearly enough about the deep sea to handle this challenge responsibly. A slightly longer answer is in my latest feature which is out today: 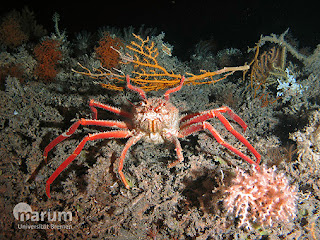 A crab observed at 700 metres depth off the coast of Ireland. (Photo: MARUM – Center for Marine Environmental Sciences, University of Bremen.)