My latest feature is about deforestation in Eastern Europe - of the legal kind in Poland and of the illegal kind in Romania. Oh, and I also managed to get a mention in for Chernobyl - at least one place in Europe where wildlife is left in peace. 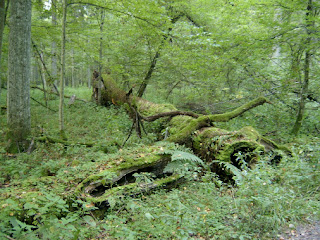 heads of the dead

today's issue of Current Biology includes a special section on the "Biology of Death". My contribution was inspired by the recent exhibition "The Skull - Icon. Myth. Cult." which I saw at the UNESCO World Heritage Site Völklingen Ironworks near Saarbrücken, Germany, back in May, as well as by the famous shrunken heads at Oxford's Pitt Rivers Museum, not far from our home. The feature rounds up various ways in which different cultures have preserved and manipulated the heads of family, friends and foes for various reasons.

Heads of the dead 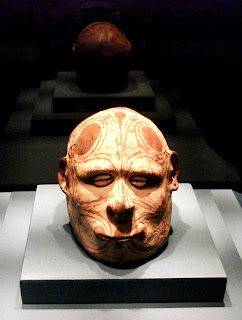 The Latmul in Papua New Guinea honoured notable ancestors by sculpting a new, beautiful face onto their exhumed skulls, using clay and shells. This is an example from the Gabriel Max collection. (own photo)

You might say my articles about science are all weird, but now I have one that actually appeared under the title Weird science, and that's a first. It is about quantum biology, a new(ish) interdisciplinary field that looks at some of the more surprising aspects of quantum mechanics and their role in biology.

Oh, and it made the cover, too, see below.

(Unfortunately, the magazine has been reduced to 10 issues a year, which is why issue no. 6 is out in July. Very confusing.)

In the same issue, on page 38, you'll also find my review of Alan Heeger's memoir "Never lose your nerve!"

time to move on?

From my family history, I know that people in centuries past have found great opportunity in new homelands, but the crucial thing is to know when it is time to move on. My great-grandfather found business success in Königsberg, Eastern Prussia, and he left literally on the last ship that got through. My ancestors who emigrated to the Odessa region (today's Ukraine) on the shores of the Black Sea in 1806 (having left the relevant oldest son behind!), established a good life there for a couple of generations. After 1870 the new paradise lost its shine and many families moved on to the US. The descendants of those that stayed suffered forced relocation to Asia and prosecution under Stalin.

So, well, right now the candidates among whom the next UK prime minister will be chosen are debating whether or not Britain (in whatever diminished size it will exist then) will allow EU citizens to stay after it has signed out of the EU. Of course they won't deport 3 million people. But conceivably, we might need residence and work permits, and equally conceivably, the recently introduced threshold of £ 35,000 salary required for the permission to stay could also apply to EU citizens (the median salary is substantially below that figure, so only those who fall into the top 40% or so of earners can stay).

So, reluctantly, after 23 years of living here very happily, we're having to consider our options, to make sure that after 2018, we will still be able to live within the EU and without having to justify our existence. Like Scotland, we may have to leave to remain. Watch this space.

A few random thoughts on the issue (will occasionally add new ones at the top of the list): 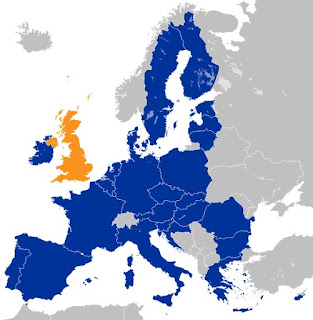 Look, there are 27 countries we can move to!

Image: Wikipedia
(spare a thought for the volunteers who are trying to keep the Wiki entries on the Brexit crisis up to date and readable)

It’s very exciting news that an intercity cycle highway is being built in the Ruhr area, Germany. I think this will save a huge number of car journeys. Many people there do cycle within their city (and/or for leisure) but tend to use the car by default when going to the other cities of the area, although they are all very close to each other. So having this cycle highway could do wonders.

And due to the recent deindustrialisation (accompanied by renaturation of rivers, creation of green spaces), there are lots of tracks, bridges, etc. already in place that can be used.

For more info, read this recent story in the Guardian.

Or check the project website (in German only, I think), from where I pinched this logo: