Today starts the Fairtrade Fortnight in the UK, so watch out for special promotions and discover new fairtrade products. This year's fortnight runs under the slogan:

Mine consists mainly of Traidcraft's GEO muesli which you can see in this earlier roundup of fairtrade products and the content is in closeup on flickr.

So, instead, I decided to spill some beans this year: 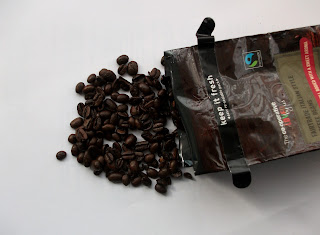 PS: shockingly, the range of products I buy is still very much the same as in the 2012 roundup - plus fruit according to season. I really should go out and discover some new stuff.

Julio Medem’s eighth full length (fiction) film features an unexpected megastar in Penelope Cruz who did some of her best work with Pedro Almodóvar (Volver). Maybe they did a swap, as Medem’s early muse Emma Suarez stars in Almodóvar’s latest, Julieta.

Cruz plays a cancer patient who only has months to live and makes the most of it. Most of the time her character, still very much alive and lively, contrasts sharply with the sterile white background of hospital wards etc., and she has life to spare for the male characters surrounding her (too many blokes for my taste, perhaps), and even to create a new life.

If I don’t sound quite as jubilant as I did after Medem’s previous films, it’s probably due to the subject matter, which I’m not all that keen on, even though I admit that I’m getting to the age where one has to take mortality seriously, and Medem, who is a few years older than me, is probably right in addressing it at this point. But why oh why does the gynaecologist, master over life and death, have to look like David Cameron? That’s just a bridge too far.

Sweetening the bitter pill of mortality for the fans of his work are numerous allusions to his earlier films, including the use of white spaces (Los amantes del circulo polar), swimmers filmed from below (Lucia y el sexo), hypnotic countdowns (Caótica Ana), “Natasha” (Room in Rome), and more. There is even a plug for his book “Aspasia”, which in the film is credited to Alberto Lafont (Lafont being the surname of his mother, which is his second surname in the Spanish tradition). I know how satisfying it is to find that everything you do connects to everything else somehow, so I can’t blame him.

The title plays with the words for mum and breast, showing how the life affirmation and the death threat are both connected to the same gland.

I ordered the DVD from amazon.es 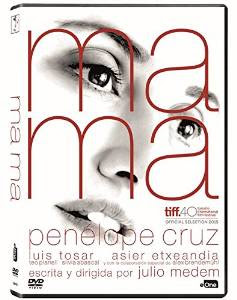 Transgender people have often featured in the news recently, including famous ones going public and less fortunate ones suffering to the point that they are driven to suicide. Personally, I find virtually nothing in the stereotypical view of maleness that I could identify with, and thus have huge sympathy for everybody who tries to escape the box that society puts them in, but I have struggled to understand why so many people would choose to take drastic measures to fit into a different, equally restricting box. If I've learned one thing from researching this topic, it's that the whole situation around our sexes and gender concepts is much more complicated than traditional world-views would have us believe.

The results of this learning experience are now published in today's issue of Current Biology: 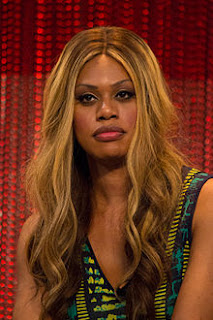 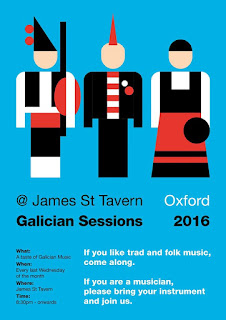 I grew up in sight and smelling distance of - not to mention fed by a salary paid by - a major petrochemical site, so I do have a tiny bit of sentimental attachment to this industry. However, if I look at the flow diagrams of what the industry produces, it strikes me that they represent an huge one-way track leading from fossil resources to products of limited lifetime to waste that may persist in the environment for much longer than the products were used, along with carbon dioxide that contributes to climate change.

Considering the limits on our planetary resources and the impact of waste on the environment, we are now all well aware that it would be better if that flow diagram looked more like a roundabout and less like a highway to hell. There are many ideas how to reuse this or recycle that, but considering the gigantic scale of that one-way system from resource to waste, they have limited chances of changing the big picture. Thus I was thrilled to learn that chemists at the NSF-funded “Center for Enabling New Technologies through Catalysis” (CENTC) are addressing the problem on a bigger scale by developing new catalysts for industry and combining known catalysts in new reaction schemes, gradually redesigning the way the world makes chemical products.

(I can send PDF files of the pages on request.)

Sneak preview of the first page - for reasons explained above I love the illustration: 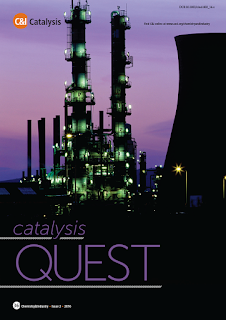 I hear today is the start of the year of the Monkey in the traditional Chinese calendar. Not quite sure which species it refers to, but by sheer coincidence, I also have a primate-related feature out today, exploring the concept of cultural learning in chimpanzees and also reflecting the conservation worries for both our nearest relatives, chimps and bonobos. 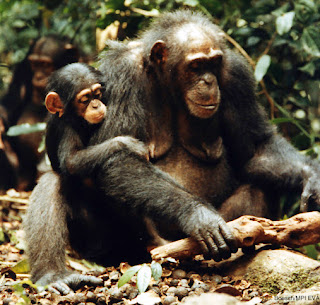 Chimpanzees in the wild are known to use both stones and wooden hammers to crack nuts. Groups differ in the patterns of tool choice for this task. (Photo: C. Boesch/MPI EVA.) 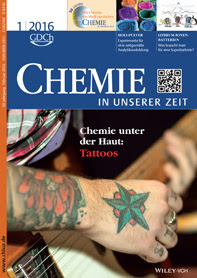 Chemie in unserer Zeit (also known as ChiuZ) has just entered its 50th year, so there are also some celebrations and reflections going on in the issue - although strictly speaking the round birthday is at the end of the 50th year, but hey, let's celebrate anyway ...

Update 16.8.2016: The genome of the nicotine resistant caterpillar Manduca sexta (tobacco hornworm / Tabakschwärmer) featured in Chemische Schwärmereien, above, has now been published.