My latest feature investigates the important question why so many stupid things are said and done at the interface between sex and politics, pegged to Todd Akin's remarks on rape victims not getting pregnant, but I think the stupidity in this field is eternal.

It is a serious problem, but on the other hand it's also an opportunity to make fun of ridiculous things, so I should admit that writing this was as much fun as one can have with one's clothes on (to tick the only sex-related clichee that I haven't used in the article itself).

Anyhow, you have been warned, 18+ readers only are invited to read the full story in today's issue of Current Biology.

Read the story in HTML and PDF format (NB: my features remain on free access only until the next issue appears, i.e. normally 2 weeks, sometimes 3, and they return to free access a year after publication) 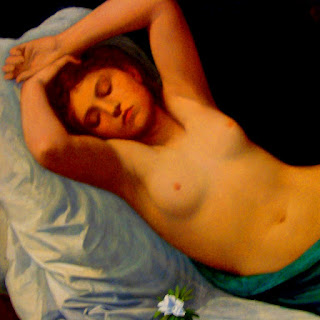 My latest book, a collection of recent nanoworld stories in German, is now officially out and in the shops.

Further information here. The shelf with my collected works now looks like this (there is a copy of everything that has its own ISBN number, hence hardback and paperback editions of the same title side-by-side): 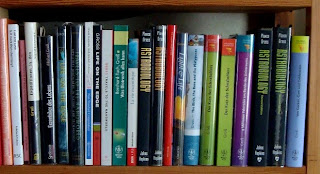 When I was 18, there was some kind of party involving my dad’s work colleagues in our garden. Observing from the sidelines, I noted that one of the secretaries wasn’t much older than me. She was polished to perfection, all fake smiles, polite phrases, small talk and social graces. As a grumpy teenager who had none of these attributes and gloriously failed to see their point, I probably wondered how much voltage you need to convert a human being into this kind of robot.

Later that night, it fell to me to drive this very same robot home, and during a half-hour drive I was surprised to find that there was a human being behind that robot façade. I don’t recall what we talked about, but I was so impressed I might have fancied her if I hadn’t seen her other side earlier in the evening, the memory of which still scared me. (I wrote a poem about this, called ecce homo, which you’ll find below – in German.)

Now I had a similar revelation from the infamous topless photos of the woman formerly known as Kate Middleton (easy to find on tumblr). I hated the whole wedding shebang with a passion and found every one of the officially approved fake-smile photos revolting, but on seeing those paparazzi shots I got, for the very first time, the impression that there may actually be a human being behind that robotic façade.

As the editor of the Italian magazine Chi said, they show two normal human beings in love. Maybe that’s why we (here in the UK) are not allowed to see them. The monarchists don’t want us to know that there are normal human beings underneath all the fancy clothes. In that case, there actually is a very strong public interest case to be made for publication of the photos, in order to break through the deception we’re getting all the time.

It is also noteworthy that, on the travels during this affair, she put on a headscarf when visiting muslim countries where women are expected to do so, but when visiting Pacific island nations where women go topless, she didn't adopt the native dress code. Very puzzling all this.

Still, why a lively human female in her 20s would choose to live a robot’s life, remains a mystery to me, in both cases.

PS: I tend to agree with Jonathan Jones's recent comment on all this.

I have found a lovely photo I would like to use here, just asked the photographer for permission and am awaiting response. In the meantime, enjoy the cover of Chi magazine and Steve Bell's topless royal family, and please check back tomorrow.

OK, giving up on that photo, here is plan B: 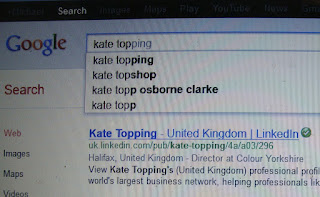 Spare a thought for poor old Kate Topping, she will have a lot of unexplained traffic on her linked-in profile this week! But seriously, while Google Germany categorically refused to censor the autocomplete algorithm just last week, when the ex-president's wife asked them to stop the auto-propagation of rumours, it looks like Google UK has decided to lend the royals a hand. Another scandal within the scandal.

My review of the book

is out in the September issue of Chemistry & Industry, page 49. The online version is premium content, but here's a little snippet for you:

"The authors of Nucleus attempt to make this big picture - how the atomic nucleus connects to everything and influences virtually every aspect of our world - accessible to a lay readership. With just over 130 pages, colour illustrations throughout, and a total absence of formulas, the book has the right kind of look for it." 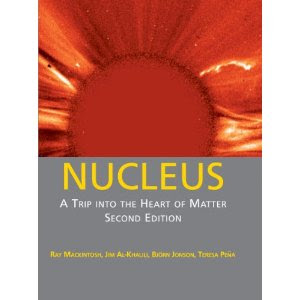 In my latest feature I'm exploring the recent discoveries of surprisingly large numbers of rare genetic variations in individual human genomes. Experts have attributed these to the rapid population expansion since the beginning of agriculture. There is still some debate re. whether or not the accumulation of such mutations poses a threat to the future health of our species.

The feature appears as part of a special review issue on Evolution and Human Health in today's issue of Current Biology:

Free access to full text available in HTML and in PDF format.

The other articles that are part of the special themed section are also on open access. 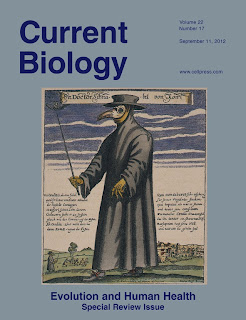 I spent a rather lovely week at Prague, checking out the EuCheMS conference and also spending a lot of time roaming the city in the footsteps of Kafka, Dvorak, Jacopo Strada, Tycho Brahe, Kepler ...

Here's a slideshow of a small selection of my photos: