This is a lovely movie about three students trying to find their way in art, love/sex, and life in general, and I reckon it shows about equal parts of these three areas. You wouldn’t be able to tell from the cover of the UK DVD, which focuses on one of these and obviously tries to sell the film as porn, which it clearly isn’t. This is underlined by the very unsubtle English title, "3some". I think the original title, Castillos de cartón, is to be understood along the lines of “castles in the air”. The script is based on a novel by Almudena Grandes with the same title (see book review below).

The three characters are set apart from mainstream society not just by their creative urges but also by their unusual 2+1 love life, which they don’t dare to spell out to their parents. This isolation increases the pressure on each of them to find fulfilment within that triangle. To me, this was the most important aspect, and it was acted very convincingly. The art could have been used even more – I love the triangular arrangement where they draw portraits of each other, but their art isn’t really used to show how they see each other.

Actress Adriana Ugarte also appears in Lo contrario al amor (which was shown at the London Spanish Film Festival this year (but I missed it) and in the earlier film El juego del ahorcado. Will have to check those out ...

Can't bear to reproduce the UK cover, so here's the spanish one, which I will at some point print off to replace the one I have now: 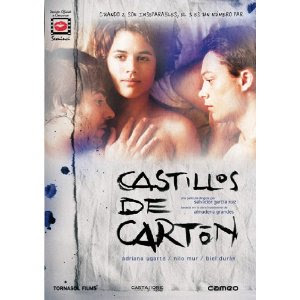 amazon UK - they sell the horrid UK edition a lot cheaper, though.

Discovering the book after having seen the movie isn’t an ideal situation, but as we live on an island that seems to be a million miles away from continental Europe, I wouldn’t have heard of the book otherwise. It hasn’t even been translated into English.

This is a slim novel under 200 pages, but it still has some intriguing layers of complexity. On top of the plot of the movie, the love triangle set in the 1980s, it has a noughties level as well. It starts with one of the protagonists calling the second to deliver the news of the suicide of the third. On that premise, which understandably makes the protagonists think of the past, the story is related in flashbacks.

There are also some formal subtleties which I quite enjoyed. For instance, the text has four parts, titled el arte, el sexo, el amor, and la muerte (the fourth, death, was dropped in the film, but the rest agrees with my three-part description above). Each of the parts starts with a statement concerning the number 3, reflecting, of course the status of their relationship:

And there are other elements like these hidden in the text, echoes, reflections, repetitions, contradictions, which I rather like, and which I’m sure will keep students in Spain busy for a while.

I think Grandes succeeds in making the artistic mind accessible. I’m a great fan of everything that at least tries to explore how creativity works and what makes artists tick, and this was an interesting addition to the relevant works I knew. Sadly, Grandes doesn’t describe in detail what the art of the most successful of the three artists looks like (or did I accidentally skip a page?). In the movie, his breakthrough moment is when he covers a huge canvas entirely with red paint, but I found no reference to that in the book.

What I did find, however, is the song from which the title is derived. It is Para ti, by Fernando Márquez, and it dates from 1995, so its use in the story is only mildly anachronistic.

The relevant lines, which are quoted in the book, are:

Anyhow. A lovely little novel. Available in Spanish and in German, but not yet in English, so if anyone wants to push for a translation …