Every picture tells a story No. 21

Ernst Leopold Kosmowsky from East Prussia (son of Auguste the missing granny, brother of Friedrich with the fiddle) moved to the rapidly growing industrial city of Hamborn in October 1922 to find work there. He worked in mining at first, but from August 1938 he was employed as a Brenner (burner?) at the steelcast factory Friedrich-Wilhelms-Hütte at nearby Mülheim.

The photo shows him (top row, marked with a cross) with his colleagues around 1941. It strikes me that he and some of the others are looking quite cheerful - suppose at that point being an essential worker in the steel industry was preferable to being cannon fodder at the front. 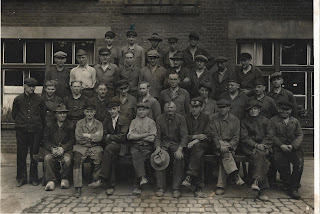 Ernst Leopold and Auguste from the East Prussian patchwork family moved to Hamborn in the same month and got married the following year, so we assume that this was a coordinated project, but we don't have any explicit information on that. Their shared migration background was wiped from the collective memory fairly swiftly.

Alternatively, you can use this twitter thread as an illustrated table of contents. If that twitter link isn't working, try this one (while I try to figure out what happened).

As I mentioned in my year review, my Plague Year Bach Project has been paused by a shoulder injury, so instead of the daily cello practice I'm spending more time with my tenor saxophone, which happens to be compatible with the injury, due to its rather brilliantly ergonomic design.

So what can I play on that? I went through our collection of flute music and also raided a few charity shops for saxophone books - there must be an amazing number of people who try and give up the saxophone, judging by the amount of discarded sheet music I found everywhere! Then I had a look at youtube and found a few players whose choices I liked, so now I almost have something I could call a repertoire, including covers of pop, rock, chanson, latin, some jazz-y things, as well as the odd classical piece.

Rasputin (-, A) - inspired by the string duo adaptation of the Ayoub sisters

Les copains d’abord (#, G) - Yo Jazz Band (I discovered this version long after I learned to play it myself, so my version is more shaped by Brassens himself and by the brilliant recent cover from Pomplamoose).

How high the moon (#, D) - backing track (a tone up compared to my version, so ###. Hang on, probably my ancient sheet music is for C instruments, so I probably should use the ### version!)

Take five (b, A) - again playing from a flute score here, so should take it up a tone.

tunes jumping around with big intervals

Sway (quien sera) - backing track to play along with

The swan (included in Saxophone solos, vol 1, Chester Music, Ed. Paul Harvey) At first I thought it was a crazy idea to adapt this for the sax, but then I realised it's an interesting challenge to produce the smooth sound required for the piece - you don't want to sound like a demented duck! 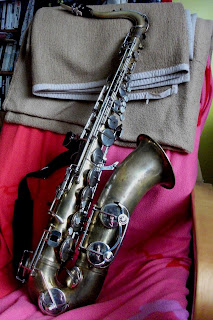 Every picture tells a story No. 20

Hedwig, the little girl with the Pippi Longstocking vibe outside Wilhelm Geppert's bakery, grew up and started working on farms, milking cows, killing and plucking geese, that sort of thing. She started working as a nanny aged 14, then from age 15 worked as a farm helper in places like Zadel and Hedwigswalde, with just one short stint as a domestic servant in between.

Here she is apparently on her way to do some milking: 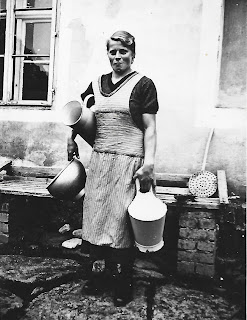 except that the photo appears to be part of a series (watch out for the sieve leaning against the wall to correlate the images), which at one point was invaded by a horse: 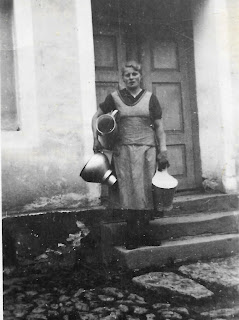 I like to start the new year with a feature on the theme of "fantastic species and where to find them". This year's instalment is on dragons - various reptile species that look like mythical beasts and/or are named after them. (Not including leafy sea dragons though, as I covered them in the original fantastic species feature.) Essentially, although (European) myths and legends tell us dragons need to be slayed (Chinese dragons are getting a bit more respect), the message here is that some of them may need saving: 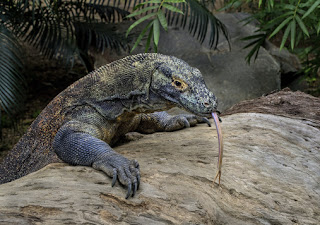 The Komodo dragon (V. komodoensis) has had its Red List status upgraded recently, as climate change is bound to shrink its surviving populations. (Photo: David Clode/Unsplash.)

PS As I write this, fossil dragons are in the news, too. Maybe keep those for the next dragon feature.

Every picture tells a story, No. 19

This photo of Karl Düsselmann (1841-1927) and his wife Elisabeth Imig (1851-1924) strikes me as unusual as it appears to have been taken informally at their home, almost as a snapshot, without the slightest worry about the cluttered background. Did they perhaps know an early amateur photographer? 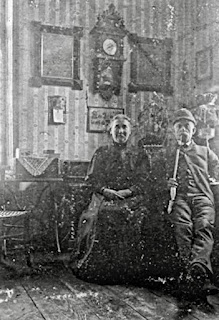 Funnily enough, we still have a couple of frames looking a lot like those two on either side of the clock. At the time of Karl's death, his peripatetic son Julius happened to be geographically close, so he may well have inherited those and passed them down to us. It's a shame we can't see who or what's in those frames and the images below, with better quality, this might have been a chance to glimpse at earlier generations of whom we have no photos at all.

Karl Düsselmann (sometimes also appearing as Carl and/or Düselmann) came from the Krefeld clan, which had prospered in the textile industry of that town. He was one of the 13 children that were divided into teams by confession: all six boys grew up protestants (like their dad) and all seven girls became catholics (like their mum). This confessional split even applied to Karl and his twin sister, Maria (1841-1932). Maria married a Heinrich Wilhelm Schürenberg and had five children - about whom we know nothing because they were on the other side of the divide.

After his military service (likely to have been 1861-64, followed by three years as a reservist) and likely involvement in several wars (see below), Karl was a Werkmeister (foreman).

Elisabeth came from the Imig clan in Simmern. Several of her brothers had moved to the lower Rhine area (earlier generations of Imigs had been involved in a failed attempt to emigrate to the New World which ended up in a new settlement on the lower Rhine, not sure if these two moves have a causal connection). Some of the brothers were quite successful there, so I am guessing Elisabeth may have used them to move to the area and find herself a husband there.

Their descendants are listed here. Briefly, Karl had one son (also called Karl) from an earlier marriage, who emigrated to the US in 1892 and had two sons there who were both born in New York. Karl and Elisabeth then had six children, but we have no photos of them with any of their children. Five of them got married and we do have photos of each one with their spouse. The oldest daughter married a Dutchman and ended up in the Netherlands, and one of the sons emigrated to the US with his family in 1924. Overall, our happy couple had 15 grandchildren.

Here's a later (and clearer) portrait of the couple: 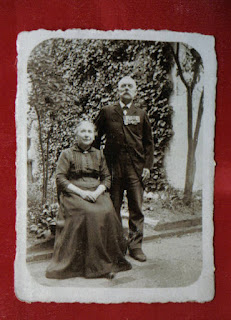 It looks like Karl got some military medals to show off. As he was born in 1841, he could have been involved in Prussia's short wars against Denmark (1864) and Austria (1866), which both fell into his three year period as a reservist, and possibly also in the one against France in 1870/71. Don't have the resolution to get any more info from the medals, they appear to be 5 of them, from left to right: big round, small round, cross, big round, flat/wavy.

Thinking of those 5 medals and forgotten military exploits in the wider context of the Krefeld clan, I'm getting the impression that the Düsselmann Y chromosome appears to be linked to a taste for risk taking (slightly surprising in a town and family thriving on spinning and weaving), see also: Julius's rollercoaster of a career; Karl's brother August was the founding director of the Krefeld fire brigade on it becoming a professional force in 1890; August's son Walter smuggled arms for Ireland's Easter Uprising, survived the sinking of the Volturno and disappeared during WW2; and August's son Wilhelm was also a seafarer and died in a road accident. Might explain that, inspite of numerous male offspring over several generations, there aren't all that many carriers of the name around today. Then again, who knows what descendents in the US have done to the name to make it pronouncable in American English.

In a somewhat roundabout way, this series relates to my research for the family history music memoir I've now completed..