This year's Fairtrade Fortnight in the UK starts today, details here. In previous years I rounded up all the faitrade products I could find in the household for a group portrait, but that might become difficult as the number keeps growing. Instead, here is a selection of fairtrade chocolates which a family member bought for a science project: 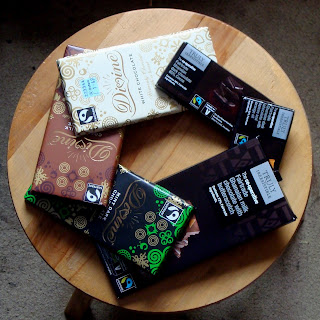 Surely, palaeontologists of the distant future will label our slice of geological time the plastocene, as a layer of plastic waste will be our signature remnant. Plastic pollution already affects the oceans to an extent that scientists aren't sure what if anything can be done about it, and whether or not particles of crumbling plastic are entering the food chain and may end up on our dinner plates.

I summed up the sorry state of this situation in a feature which is out in today's issue of Current Biology.

It is freely accessible in

(at least for now, while the issue is current).

PS Bo Eide was also involved in making this lovely video on the problem of marine litter.

DNA nanotech is a field I've followed from its very beginnings, i. e. Nadrian Seeman's DNA cube in the early 90s. Back then, it was playful "misuse" of the tools developed for molecular biology, but increasingly, the methodology has become more versatile and sophisticated, leading us to a point now, where people can design complex and useful things, like nanopores, self-assemble them rapidly and efficiently, and rely on getting the structure they designed. There aren't many molecules you can do that with on a scale of tens of nanometres. So, while it remains an oddity that people misuse an information molecule to build machines, DNA nanotech has grown up into a technology to be taken very seriously.

My latest feature on this field is out in Current Biology today: 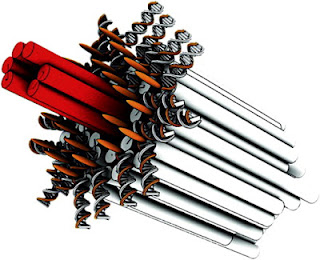 PS: I've also covered the same work in an article in German, published in May 2013:

Bach for cello and flute

Looking through the flute tag on tumblr earlier this week I came across an ancient video of Jethro Tull performing "Bouree" (not sure what happened to the second "r" but that's what they call the piece), based on Bach's Bourree from BWV996, which I played on the guitar many years ago.

As Jethro Tull play the Bach bit with flute and electric bass, I thought that should work for flute and cello as well, so I found a guitar version on noteflight and converted it to cello and flute, with both instruments taking turns in the repeats.

Sounds ok when noteflight plays it (though it doesn't do the pizz I wanted). Will try out with real instruments soon.