The latest addition to my growing collection of arrangements for cello and flute is an adaptation of the slow movement from Dvořák's cello concerto. I've left out a section in the middle, bringing it down to 6 minutes length. The rest in bar 66 marks the spot.

As the original work is largely a dialogue between the solo cello and the woodwind instruments in the orchestra, I'm hoping that my edit makes some kind of musical sense, but all hints and suggestions for improvements are welcome.

PS: Noteflight members can see a handy list of our other scores here. Mere mortals can access them individually through the earlier blog entries.

a robot's life for me

there are exciting things going on in the fields of robotics, biomimetics, and biohybrids, but for some reason researchers in these fields tend to communicate their important results via conference proceedings rather than high profile journals. So when I went to the conference Living Machines at London in July, I realised that there are lots of things that hadn't shown up in the pages of Nature and Science. I haven't really looked at these issues since publishing "Biotronik" ten years ago - a book in German which looked at biohybrids and the interface between biology and electronics.

Trying to make up for lost time, I wrote a feature about these things, which is out today in Current Biology:

Vicky Vouloutsi from Barcelona held an intriguing talk about programming social behaviour on the established android system iCub (I could have benefited from such programming in my early life too!), so I took a snap of her and her pet: 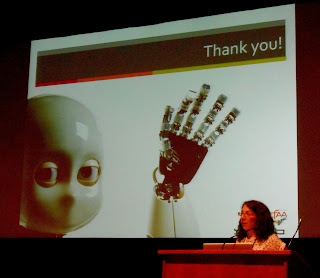 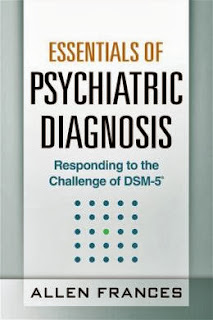 not showing at a cinema near you

I only just discovered that the annual statistical yearbook from the BFI (British Film Institute) has statistics on everything, including the foreign language films that I would like to see in cinemas but that fail to turn up. So I had a good look at the BFI statistical yearbook 2013:

According to the country of origin stats on page 17, 151 (23%) of the movies released in the UK in 2012 came from other European countries (198 from the US, 162 from the UK). I have a nagging suspicion that figure includes one-off showings at festivals or at specialised cinemas like the Ciné Lumière at the Institut Français in London. At least the number that made it to Oxford cinemas is definitely 5 times smaller. They account for 4.8 % of box office takings, but of course one could argue endlessly which is the hen and which the egg in this story.

Also see the chapter 5, "Specialised Films", which includes specific stats on foreign language films. Apparently, 230 films in 32 foreign languages were released in 2012, accounting for 35.5% of all releases, but taking only 2% of the box-office. Allegedly the number has increased from 96 in 2001, which is contrary to my impression. This is in line with an increase in total releases (and in audience figures), however, so the percentage is stable at 35.5%

Speaking of which, German film “Die Wand” shows exactly once at the Phoenix Picturehouse in Oxford, next Tuesday at 6pm. The same slot will host Fernando Trueba's The artist and the model later this year, which allegedly is on release from this week. After a tweet from me, the distributor, Axiom films, pointed me to the list of "tour dates", so you can check if it comes near you. 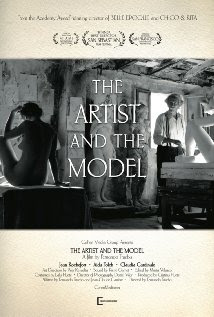 Londoners also have the benefit of the annual London Spanish Film Festival at the Ciné Lumière, which will run from September 27th to October 9th this year.

My feature on Spherical Nucleic Acids (SNAs) - a kind of assembly in which short nucleic acid strands stick out radially from a nanoparticle core - is out in the September issue of Chemistry & Industry:

This is premium content with restricted access to the full text, but I may get pdf reprints. 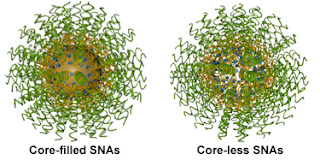 PS - as punishment for making fun of people for publishing DNA helices the wrong way round, I've been hit by another inverted helix in the illustrations for this article, which I didn't get to check. Fortunately, it's a detailed ball-and sticks model where the chirality is very hard to verify, so it won't mislead anybody who doesn't know already which way the helix is supposed to turn. 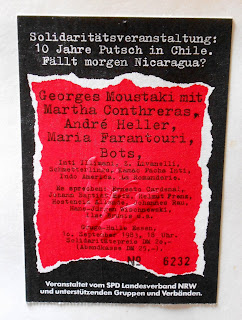 memories are made of what exactly?

Today's issue of Current Biology is a special issue on memory, with lots of great articles on various aspects of memory. Oh, and there's also a feature from me, on sharp-wave ripples and whether or not they're important for memory.

Are memories just ripples in time?

All the themed content in this issue will remain on free access for a month after publication date, apparently.

By coincidence, there is also a new book out about one of the most extensively studied patients with memory loss, H.M. While this isn't directly linked to ripples, the cause of his memory loss was removal of his hippocampi, and they are also the source of ripples, so that was a good enough excuse for me to mention his case. 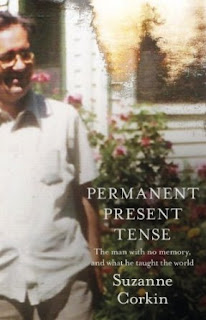 Since April 2000, I've been publishing a humorous column called "Ausgeforscht" (vaguely: all done with research - the launch coincided with the end of my research career) in the magazine of the German chemical society (GDCh), Nachrichten aus der Chemie, every even-numbered month. As of this month, the column will begin to appear in every issue, and it has moved to the very end of the magazine, i.e. to the inside back cover. Easy to find, easy to rip if you want to collect the pieces like I do.

Columns until October 2010 are collected in my book 9 Millionen Fahrräder am Rande des Universums - hopefully with the higher frequency I won't have to wait quite as long to build critical mass for another book ...

Oh, and this was also the round-up of the September pieces, as there is only this one:

The piece features the Let toys be toys campaign against gender stereoptypes in the marketing of toys - several large retailers in the UK seemed to think that chemistry kits were toys for boys, until the campaign started poking them. 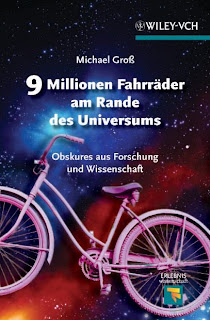 PS (7.9.) latest news from the toys front: LEGO is releasing its first minifigure of a female scientist, and she's a chemist, more info here.

This summer was perfect for being out and about with nothing but a sun hat, and the perfect book to enjoy with that would be one about the weird and wonderful cultural history of nudism in (western) Germany, from its beginnings until ca. 1970.

This paradox is to me the most intriguing aspect of organised and card-carrying nudism to this day, but it was even more pronounced in the prohibitive climate of the 1950s. Nudists were fighting for the right to be different, to indulge in the minority interest of running around in their “Lichtkleid” (i.e. only dressed in light), confronting a catholic/conservative society that saw nothing but sin in nudity. At the same time, however, they were just as keen to be seen as normal people who had no links to anything unspeakable like sex, promiscuity, or homosexuality. Rather than fighting for a more open-minded society, they chose to campaign only for their lifestyle to be accepted as normal, while everybody else who fell outside the norms could go to hell. Ironically, there was no such battle in the GDR, as nudism was one of the liberties tolerated by the regime.

Ernst Horst previously published a book about Erika Fuchs, the highly influential translator of Disney comics, which I still have to read. Here he adopts the pose of an amateur anthropologist somewhat restricted by the scope of what magazines he can find on flea markets and what information he can search on the web. I wouldn’t mind that so much, except that he talks a little bit too much about writing the book, instead of actually covering the subject matter. Apart from that gripe, however, this is a cultural history well worth reading, regardless of whether you’re sporting tan lines or not. 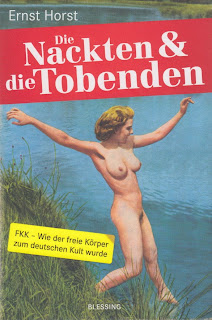