Earlier this year I stumbled across economists' projections that there will be 2 billion motor vehicles on the roads by 2030. We passed one billion some time around 2010. So the car population will double within 20 years. Maybe the scariest part of this is that those economists seem to think that this is a good thing, and how lovely that people will have to buy fuel for those (because the vast majority will still run on fossil fuels!) and what opportunities that will bring for economic growth.

Well, put that together with the facts that nearly all Diesel cars emit more than they are allowed to, the ongoing scandal of VW's emission test cheating, and that people in cities like London are actually dying prematurely due to this pollution, and the road building that destroys the rest of the natural environment left on this planet, and all that gets me quite angry enough to write a couple of thousand words in a few hours. For comic relief I have thrown in a photo from last year's World Naked Bike Ride - virtually the only visible protest against car culture these days.

A planet with two billion cars 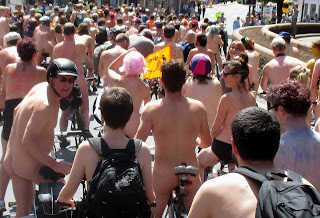 People look much nicer without cars (and clothes) - Bristol WNBR 2015