Both insects and spiders tend to have a bad press, so I collected up some examples of how insects make positive contributions to our world, apart from the pollinators which I have covered on numerous other occasions. And to round it up I've thrown in the recent study estimating how many insects end up being eaten by spiders. The feature is out today:

How insects shape our world 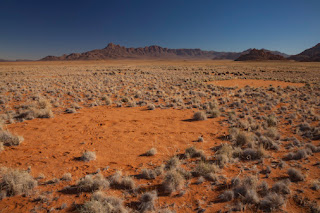 Fairy circles in Namibia have caused lively debates. Recent modelling suggests that both feedback regulation of plant growth and competition between insect states play a role in creating these patterns. I just love this photo from Jen Guyton, check her website www.jenguyton.com for lots more amazing wildlife photography.
Posted by Michael at 5:39 PM 0 comments

The revolutionary gene-editing technique known as Crispr-Cas has been embroiled in a patent dispute between two leading US research institutions. In one corner, the University of California at Berkeley, where Jennifer Doudna discovered it in collaboration with Emanuelle Charpentier, and in the other, MIT’s Broad Institute, where Feng Zhang’s group first demonstrated its use in living cells.

Now the two institutions are competing against each other again, as both recently demonstrated the usefulness of a different Crispr system for the detection of pathogens. Doudna’s and Zhang’s groups had shown in 2016 that a Crispr-type enzyme called C2c2, now renamed Cas13, targets single stranded RNA, unlike the ones used in gene editing, such as Cas9, which edit double-stranded DNA. Moreover, it doesn’t stop cutting once it has destroyed its target. It goes on to cleave thousands of other RNA molecules that happen to be nearby. This collateral damage provides a useful amplification step enabling the sensitive detection of the original target RNA, whose recognition can be programmed just as in the gene-editing method.

Aiming to turn this into a clinically usable sensor, Zhang teamed up with Jim Collins, also at MIT, who was involved in the race to develop practical methods for rapid detection of the Zika virus.

Read all about it in my latest news story in Chemistry World which is out now (free access if you haven't read any other CW stories this week, they have a free quota):


Today I’ll exceptionally present a feature from the archives that was published in Chemistry World, not in Current Biology.

The occasion is that today is the 20th anniversary of one of my favourite and most impactful papers from my research career, even though it did not result from actual research I did.

What happened back in 1997 was that my friend and colleague Kevin Plaxco happened to know about a paper from molecular biologists coming out on a weird mechanism controlling the growth of the tail (flagella) that certain bacteria use to swim. The tail is a hollow tube, and while it is being built, a certain signalling protein escapes through the tunnel and is lost to the cell. When the tube is finished and closed, the protein accumulates in the cell and thereby signals that no more bricks are needed to extend the tunnel.

What Kevin noticed was an aspect that left the molecular biologist authors of the original paper gloriously uninterested – namely the fact that to carry out its biological signalling function this protein needed to be an unfolded, 1D thread, as opposed to a complex 3D structure as all functioning proteins were supposed to be according to the prevailing dogma that sequence determines structure determines function.

So Kevin told me about this and suggested to write a News & Views piece for Nature, which we did, and which came out 20 years ago today. At the time there were only two or three other examples of “intrinsically disordered” proteins that are functional while unstructured. Mostly the evidence relied on NMR spectroscopy, which invites the objection that maybe the researchers didn’t get the conditions quite right and maybe the protein would be more orderly if they did x instead of y.

The beauty of the system we discussed was that the biological function of the protein made it absolutely necessary to unfold, as it wouldn’t fit through the tube in its folded state.

Anyhow, this turned out to be the beginning of a whole new research field which grew quite impressively over the next years, so in 2010 I had the pleasure of attending a research conference at Barcelona that was all about intrinsically disordered proteins.

And summarising what I learned at this conference, I wrote a feature about the topic which appeared in 2011, and which is freely accessible: 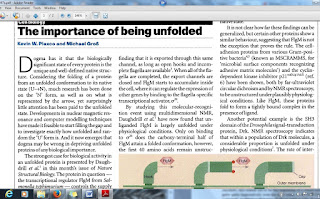 our home-built hammered dulcimer is a year old now, and while I'm still struggling with the hand alternations, the young musician has performed some lovely music on it, so here are a couple of videos to prove it:

Duo: The sliding dulcimer (by Ed Pritchard, who also plays the other dulcimer and recorded the video)

... and a photo of dulci in action at the French session, James Street Tavern: 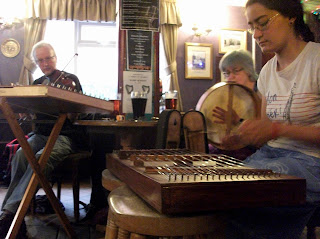 here comes the round-up of German pieces published in March and April, including serious science on zinc fingers and f-group chemistry, and slightly less serious stuff on champagne and smelly socks. 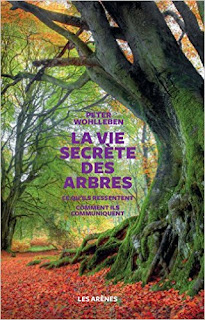 I have half a cover story in the new issue of Chemistry & Industry - as the cover is about future means to power transport, including biofuel and batteries. My feature is the one about batteries:

Homo sapiens came out of Africa and conquered the world, more or less in one sweep, or so we used to think. Exciting new finds from China, however, suggest that a significant movement to the East - convenient inasmuch as it allowed people to stay broadly in the same climate and vegetation zone - happened much earlier than previously thought, and much earlier than the expansion into Europe.

I've discussed the latest discoveries from China, also including two archaic human skulls that have been speculatively linked to the Denisovans so far only known by their DNA, in my feature which is out now: 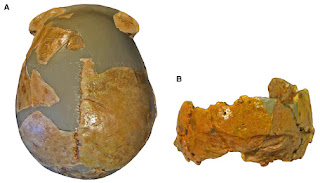 The Xuchang 1 (A, superior view) and 2 (B, posterior view) crania discovered at the Lingjing site. (Photo: Xiu-jie Wu.)