The slightly delayed January issue of Chemistry & Industry includes my feature on chip-sized microfluidic models of human organs, mainly based on the amazing work that's been done at the Wyss Institute at Harvard in recent years. This may well revolutionise medicine and make animal testing redundant. 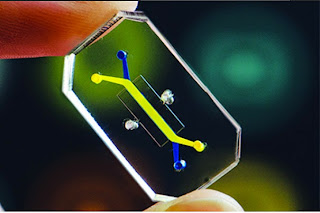 In the same issue, there is also my review of the book

The burning answer: a user’s guide to the solar revolution
by Keith Barnham (Weidenfeld & Nicolson 2014)

Here's a snippet from my (long essay) review:

"In fact, Barnham delivers three books for the price of one: a popular science book on the historic developments that led to our current energy technologies, then the “user’s guide” of the subtitle, an analysis of the present day situation in the renewable energy vs. climate change field complete with a manifesto for the revolution, and finally a look at what should and might happen in those crucial 15 years ahead of us, which may well decide the long-term success of our civilisation."

I was very impressed when I read that the author Ann Morgan had managed to read one book from each of the 196 countries represented at the 2012 Olympics in London. Her list of books read and others that were recommended to her is here, and the book she wrote about the experience is reviewed here.

Thinking about how embarrassingly far I would fall short of that figure I estimated I would be lucky to make it to 50 countries (in my life so far, not in a year) and started my own list to prove it. If and when I've reviewed a book on this list, I've included a link to the review. If I can't remember whether I've actually read it (even though it's on my shelf), I've marked it with CR. NFY means not finished yet. Still struggling to get to 50 though. 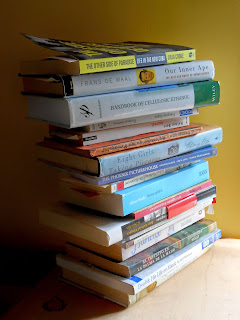 Own photo of my reading pile some time in early 2014.

PS: I'll keep updating this with any further reading adventures, hoping that one day I can travel around the world in 80 books ... So this post will also serve as a directory to my reviews of world fiction.

In December, I attended the Cell Symposium on type 2 immunity (i.e. our adaptive immune system as opposed to innate defence mechanims) and learned a lot about the big two questions in the field of allergy, namely why did allergies evolve, and why are they becoming more prevalent in industrialised societies?

It's been a steep learning curve not helped by immunologists' habit of speaking in acronyms, but I believe I discovered some meaningful connections to evolution and ecology - it's really all about snakes and parasitic worms. So I wrote a feature summarising what I think I understood, which is out today: 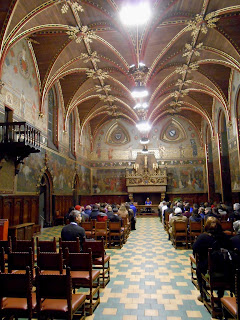 The Cell Symposium in session (this was a reception in the town hall though, not part of the scientific programme). Own photo. 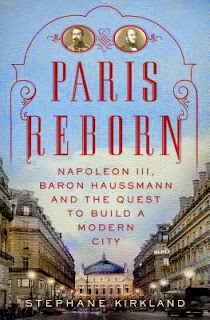 Current Biology starts its 25th year today and, in celebration, issue 1 of vol 25 is dedicated to the biology of fun and all things fun in biology (there's also a press release for this).

My contribution to this has been a look back at my own work in science communication (not quite 25 yet but soon) and to reflect on how having fun with and occasionally even making fun of science can help the worthy cause of disseminating the insights of science to a wider public.

The joy of science communication 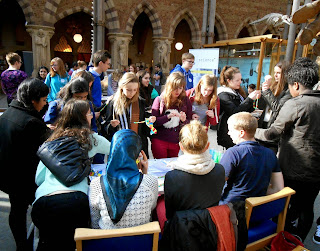 Own photo of young people having fun with science at the Oxford Museum of Natural History.