World Naked Bike Rides are definitely back to normal this year, as the photos from last weekend's rides at London and Brighton demonstrate (eg here and here). (Some rides may also have happened last year as well, not sure what went ahead and what was cancelled, and in any case I wasn't ready to attend any mass events last summer.) See this blog entry for my pre-Covid WNBR ravings.

So if like me you missed the big rides that have already been and gone (London and Brighton clashed with my travel plans), here's the schedule for the rest of this naked cycling season in the UK and neighbouring countries (once the rides have happened, I'm adding flickr links):

(I got the dates from here and sorted them chronologically rather than alphabetically, and threw in a few international dates too.)

As the weather forecast looks a bit unpromising this weekend, I'll skip the much-loved Bristol ride. I am speculating that it will be better by the time the Cardiff ride rolls along. In the past, Bristol and Cardiff were often on the same weekend, which is no use, if one has bad weather the other has too, and if not, it's awkward to travel to both. So anyhow, fingers crossed, and here's the lovely poster for Cardiff: 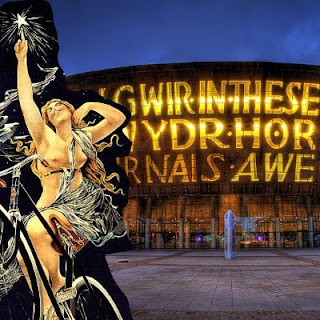 Nicked from their twitter feed. I love their twitter handle @DiffWNBR - it took me years to figure out that they took the Car out of Cardiff. Oh, and the source illustration of their cyclist is here.

Special shoutout for Tony Grimes's amazing album of London 2022, with 200+ pics, many of which are portraits of individual riders. They are also in the group WNBR London 2022.

PS On one ride, I saw a guy who had the dates of his WNBR adventures tattooed on his back (maybe a dozen or so?). I'm not quite as crazy (yet) but here's my modest list of seven rides:

I just discovered that Flickr user "Sunny days6" has albums with lots of crowd photos from four of these rides (the London and Brighton ones), so I need to go through and play Where is Wally? Might be tricky to find pics I'm in as I don't even remember what hat I wore on which ride.

At Oxford, there has only been one ride, in 2014, and I only found out about it when it whizzed past me.

I mentioned the WNBRs in my 2016 feature A planet with two billion cars and used one of my photos of the ride - one of the occasions when fun magically turns into research. That two billion figure was an extrapolation made for 2030 - I should probably check up on that some time and write an update. Even if electric vehicles get a lot of press coverage these days, the growth that leads us to two billions will happen in the developing world, and it will comprehensively be fuelled by with diesel.